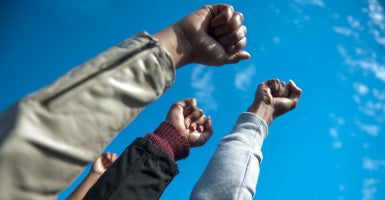 As debate heats up over “safe spaces” at campuses across the United States, one college president is standing up to students who claim they’re victims when their opinions are challenged.

Everett Piper, president of Oklahoma Wesleyan University, called on students to “grow up” after he got a complaint from an undergraduate who felt “victimized” following an on-campus sermon on love.

In a letter posted to the school’s website that went viral, a stunned Piper wrote that the homily apparently made the student “feel bad for not showing love.” He added:

I’m not making this up. Our culture has actually taught our kids to be this self-absorbed and narcissistic. Any time their feelings are hurt, they are the victims.

Piper told students the small Christian liberal arts school is “not a day care” or a “safe place,” but “a place to learn.”

He noted that the university would not follow the trend of some colleges that issue “trigger warnings” before expressing a potentially distressing or provocative idea.

Piper told The Daily Signal that his letter reflects concern not only for students, but for cultural trends against free speech as universities are hit by political protests demanding “safe spaces” where opposing perspectives are barred.

Last month, protests drawing thousands of students at the University of Missouri to demand greater diversity forced the resignation of the school’s president and the chancellor of its flagship campus.

The incident inspired similar movements across campuses, including Yale and Ithaca College, where students have pushed administrators to create safe spaces for racial minorities. But the issue also sparked debate as to whether the shifts go too far in restricting free speech.

“Today, the antithesis of the liberal arts is the shouting down of another human being because you disagree with him or her,” Piper told The Daily Signal. “The creation of a safe space so that a countering idea cannot enter your world—that is not education. That is nothing but ideological fascism.”

He said “safe spaces” contradict the goal of higher education, which should be to pursue truth, not protect only some opinions. He also said it is the job of educators to help others pursue truth, a job that must be taken on with “confidence and courage.”

“I’m looking my peers, my fellow academicians in the eye and saying we’ve created this,” Piper said, adding:

We are reaping the results of a broken world view … and yes, I am trying to say to others, ‘Get a backbone. Speak up. Be an educator, not an enabler.’