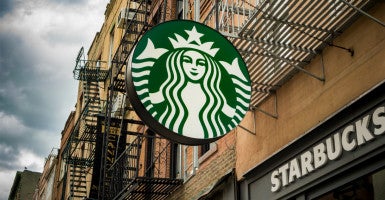 Starbucks is one of many companies that donate to Planned Parenthood. (Photo: Richard B. Levine/Newscom)

A pro-life group say it has convinced more than 300 companies to stop donating to Planned Parenthood, the nation’s largest abortion provider.

The organization, Life Decisions International, tracks corporate sponsors of Planned Parenthood in an effort to encourage them to stop donating.

In an interview with The Daily Signal, Doug Scott, president of Life Decisions International, said his group is “primarily an educational organization.”

Its aim, Scott said, is to educate companies and CEOs about Planned Parenthood’s “real agenda.”

Using Planned Parenthood’s own annual reports, newsletters and IRS documents, Life Decisions International determines which companies contribute funds. It adds the findings to a list of such donors, and encourages pro-lifers to use the list to boycott them.

Discussions with each company are “kept completely confidential to spare them the backlash from pro-abortion people,” Scott said.

Tom Strobhar, chairman of Life Decisions International, told The Daily Signal that more than 300 companies “no longer give to Planned Parenthood” because of his organization.

But at a shareholder meeting of Starbucks, a donor to Planned Parenthood, Strobhar said he was “booed by 3,000 people” when he shared his pro-life message.

If a company stops donating to Planned Parenthood, Life Decisions International doesn’t reveal on its website that the company used to do so.

If a company won’t stop donating, it is added to the list.

“Our biggest thing is integrity,” Scott said. “We only add the company to the list with 100 percent certainty. We give them all the chances in the world to stop before we add them to the list as well.”

Scott said integrity is key, because companies must trust his group if it is to be effective.

“We once got a call from the vice president of a company who told us that [its] president was donating corporate money to Planned Parenthood and he couldn’t get him to stop,” Scott said. “So they know they can trust us.”

Don’t buy anything from the company, but more importantly, let them know why. Persistence is key. This isn’t an Al Sharpton boycott. We’re not going to protest for a few days and go away. We’re going to picket, we’re not going anywhere. One thing these companies really don’t like is a public black eye, and we really make them face it.

His group doesn’t share the amount of money a corporation has donated to Planned Parenthood, because “a penny is too much,” he said.  “Corporate donations make them look legitimate.”

Life Decisions International’s chairman, Strobhar, has a background in finance. He said the group purchases shareholder resolutions so its representatives are entitled to attend shareholder meetings, giving them the opportunity to discuss corporate donations to Planned Parenthood with the executives of a company.

Many times, Strobhar said, executives believe their contributions went to a specific program at Planned Parenthood.

“Money is fungible,” he said. “You don’t know where it goes once they have it.”

Sometimes, Strobhar said, executives are receptive to the idea that their companies shouldn’t be affiliated with such a controversial organization. Other times, however, they are dedicated to their pro-abortion views–as has been the case with Starbucks.

Targeting corporate donations is “something we can do that works,” Strobhar said:

On a pound-for-pound basis, I would argue we’re the most effective pro-life group. We do very much with very little. Life Decisions International is a unique part of the pro-life cause.