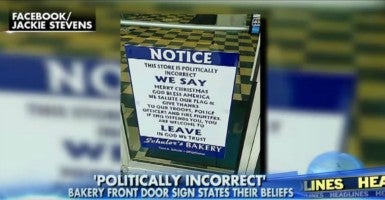 Schuler’s Bakery posted signs outside of its four Ohio locations stating that it is not politically correct. (Photo: Fox News)

A sign posted outside an Ohio bakery eschewing political correctness has gone viral.

Schuler’s Bakery posted signs outside of its four Ohio locations that read:

Notice: This store is politically incorrect, we say Merry Christmas, God Bless America, we salute our flag and give thanks to our troops, police officers and fire fighters. If this offends you, you are welcome to leave. In God We Trust, Schuler’s Bakery, Trent A. Schuler, CEO/Owner.

In an interview with The Daily Signal, Schuler said he posted the signs “out of frustration with what I see in society.”

Schuler said he was frustrated by “a lack of support for our troops and police officers, and a lack of reverence for God in society.”

He decided that due to his belief in “freedom of expression, freedom of religion and freedom of speech,” he wanted his customers to know that he won’t “toe the party line.”

He discussed the signs with his staff prior to hanging them. Some raised concerns that customers might be “offended.”

“It was not my intention to anger or offend anyone,” Schuler said. “I’m just exercising my right to express my opinions.”

Schuler called the response “overwhelmingly positive,” adding that he’s received calls of support from as far away as Hawaii and South Africa.

“This just goes to show there are a lot of people who feel this way.”