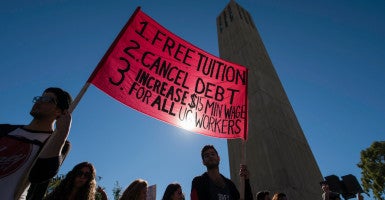 A Million Student March organizer struggled to answer questions regarding how the goals of the movement would be compensated during an interview Thursday. The movement calls for free public college tuition, the canceling of student debt, and a $15 per hour minimum wage for students working on campus. (Photo: Kenneth Song/News-Press/ZUMA Press/Newscom)

Keely Mullen, a student organizer of the Million Student March, struggled to answer Fox News anchor Neil Cavuto’s questions regarding how the goals of the movement would be compensated during an interview Thursday.

In the interview, the Northeastern University student said the march is seeking to accomplish three goals: “free public college, a cancelation of student debt, and a $15-an-hour minimum wage … for people who work on the campus.”

Cavuto proceeded to ask how it would be paid for.

“The 1 percent of people in society that are hoarding the wealth and really sort of causing a catastrophe that students are facing” would be responsible for the funds, said Mullen.

Cavuto stated that the one percent mentioned by Mullen are “smart folks, these people—these one-percent hoarders right? So they leave here. Then who’s going to pay for all this stuff that you want?”

Mullen struggled for a moment to grasp the question, and Cavuto assured her that he meant leaving “the country.” Mullen then responded by saying, “I mean, there’s always gonna be a one percent in the U.S. The U.S. is like the bastion of capitalism and its success.”

After noting that the top percentile of society pays “around 50 percent with taxes,” Cavuto asked if Mullen thinks the one percent should “get back” to paying around a 90-percent tax rate. Mullen believes that “eventually” the country will return to that high a tax rate.

Cavuto continued to question Mullen’s feelings toward a 90-percent tax rate after she said her friends would “absolutely” be okay with paying that.

“I dare say, unless you’re high as a kite, you wouldn’t volunteer to pay 90 percent, right? I mean unless you really did see a considerable bang for the buck and it was worth it? … But a lot of times you realize it’s not worth it, and given some of the track record we’ve seen with government, it doesn’t always work.”