Is There a Gun Violence Epidemic? The Numbers Say No 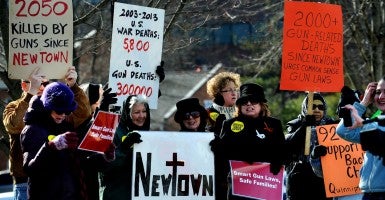 The recent mass shooting in Oregon has brought the seemingly endless debate on gun control back into the national spotlight.

Are we, as some insist, in the midst of a gun violence crisis? Gun control advocates would certainly have you think so.

Hillary Clinton recently stated that “this epidemic of gun violence knows no boundaries.” Even the American Public Health Organization states in its section on gun violence that “a comprehensive public health approach to addressing this growing crisis is necessary.”

A quick look into the facts reveals an entirely different picture. According to the FBI, in the past two decades, violent crime has been falling almost continuously. In 2013, the number of violent crimes perpetrated was 37 percent lower than it was just two decades earlier.

The Department of Justice further concludes that even non-fatal gun-related crimes are declining, dropping 69 percent between 1993 and 2011. While the exact causes for this dramatic decrease can be debated, the decrease itself raises the question: Where does this idea of an “epidemic” of rising gun violence come from?

The most significant factor may be the large-scale media coverage of and public interest in mass shootings. Americans are captivated by stories of mass shootings and have followed them closely.

According to the Pew Research Center, in 2012, 57 percent of the American public said that they followed the Newtown, Conn., school shooting “very closely.” The attention given was second only to that year’s presidential election. The Pew Research center further reports that 48 percent of Americans also paid close attention to the movie theater shootings in Aurora, Colo.

The simple fact is that horrific headlines, such as the number of children gunned down in a school, have a greater shock value than nearly any other kind of story. The media understand this. Seeking, as always, the highest ratings, media companies tend to disproportionately report on mass shootings even though mass shootings account for only a fraction of the total number of homicides committed each year.

The result is biased news coverage that creates the perception that an uncommon event is in fact happening all the time. Add to this the fact that news outlets, particularly local ones, already dedicate substantial portions of their time to general crime reporting, and it is no wonder that Americans consistently overestimate the violent crime rate.

Then there is the fact that terms like “gun violence” can be deliberately manipulated to serve political agendas. Gun control advocates frequently cite the alarming statistic that 33,000 Americans are victims of gun violence each year. Statements like that clearly give the impression that 33,000 Americans are murdered with a firearm; the truth is that two-thirds of those gun deaths are suicides, not homicides. Suicide is certainly a tragedy, but it is hardly equatable with homicide.

Half-truths and misleading facts like these help gun control advocates sell the narrative of an out-of-control “gun violence epidemic.” Their goal is simple: scare citizens into supporting policies that curb the sale and possession of firearms. Some in the media are willing accomplices, exploiting their position to advance the cause of gun control. But the truth is, ideological bent or not, ratings-hungry media outlets have many self-interested reasons to play along.

Vigorous public debate is at the very core of our democracy. If done sincerely, it encourages people to examine all the aspects of an issue, challenge their own preconceptions, and, if necessary, rethink their positions. It helps to produce the best and most sound public policy, grounded in reality and solving real problems. But the value of these debates is lost when facts are manipulated to advance an ideological cause.

How should the nation deal with gun violence and instances of mass shootings? Let’s start by getting the facts right.