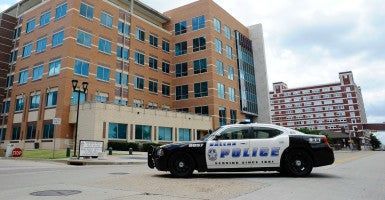 A man deported from the United States three times is accused of running over a Dallas police officer and backing into a second cop.

The illegal immigrant, Eduardo Gonzalez-Rio, is being held in the Dallas County Jail, according to The Dallas Morning News.

Gonzalez-Rio, 29, was escorted out of a nightclub early Mondaymorning. He got into his SUV, ramped up over a curb, and ran the vehicle into Senior Cpl. Ed Lujan twice, critically injuring the officer, police said.

Lujan was “working off duty at [the] local nightclub to provide for his family” and “sustained critical injuries,” according to a statement from the National Latino Law Enforcement Organization.

The Tyler Morning Telegraph reported thatthe SUV backed into another officer, but he suffered no injuries.

After being treated at a hospital, Gonzalez-Rio was booked and jailed Wednesday on three charges of aggravated assault on a public servant, according to the Associated Press.

Here illegally from Mexico, Gonzalez-Rio reportedly had been deported in 2004, 2005, and 2011. Local TV station WFAA News 8 said the deportations happened twice near Harlingen, Texas, and most recently in Kansas City, Mo.

Lujan, a 20-year veteran of the Dallas force, was treated for numerous broken bones and a lacerated scalp. News 8 reported that the officer nearly died Monday morning.

“President Obama and Democrats who worked to stop the passage of Kate’s Law are directly responsible for what happened to this cop,” said Hans von Spakovsky, senior legal fellow at The Heritage Foundation.

The proposed Kate Steinle Law would slap a five-year mandatory minimum prison term on anyone who returns to the United States after being deported and is convicted of an aggravated felony—or who has three strikes against him for trying to enter the country illegally.

Lawmakers proposed the measure after 32-year-old Kate Steinle was shot to death earlier this year on a San Francisco wharf by an illegal immigrant who had been deported five times. Legislation including the provision was blocked in Congress.

“Illegal aliens who re-enter the country after being deported need to serve time in prison to deter this kind of behavior,” von Spakovsky said.