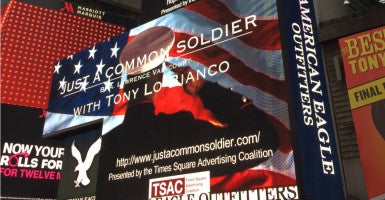 Veterans gathered in Times Square to watch a video tribute that featured the poem "Just a Common Soldier." (Photo courtesy of Stephen Clouse)

Veterans gathered in Times Square on a wet, rainy morning the day before Veterans Day to watch a video.

Producer Stephen Clouse was present as a video tribute played to a crowd of a couple dozen veterans, who turned out in New York City despite pouring rain. The video, featuring the poem “Just a Common Soldier,” has gone viral with the launch of a video campaign earlier this year.

Clouse gave the following message at the event: “We produced this video to get people thinking about veterans who have given so much for our country. So often we forget the sacrifice of ordinary citizens who do extraordinary things for our liberty and way of life.”

With the launch of the project during Memorial Day weekend, a goal was set to reach 21 millions “likes” and “shares” of the video on social media, in honor of the approximately 21 million living vets, between Memorial Day and Veterans Day.

“It’s a deeply moving experience,” Clouse said in Times Square. “And no less than our veterans deserve to keep them from fading from our memory.”

In the video, Tony Lo Bianco reads the poem.

“I heard Tony Lo Bianco, Hollywood actor of stage and television, read this magnificent poem called ‘Just a Common Soldier’ to friends on several occasions,” Clouse said. “It was a moving tribute to the soldiers, sailors, Marines, and airmen who have served our great country.”

“Without fail, it moved my friends powerfully and even to tears. I was inspired to take Tony’s read of the poem and show images of our honored vets, as they were on the battlefield, and as they are now. Little did I know that it would go viral over Memorial Day weekend and reach 6.9 million people in five days.”

After the New York event wrapped up, in a phone call, Clouse told The Daily Signal he was pleased with the turnout for the event.

Clouse would like the poem to come alive, especially for young people, and for people to “never forget the sacrifices of America’s military.”

“I think [the video] inspired people, maybe like a paradigm shift, to think differently about the military and its role in keeping us safe and free.”