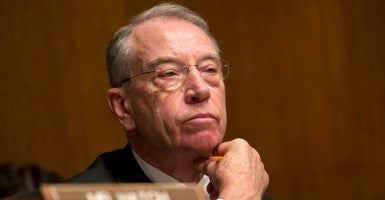 The agency’s proposed regulations would allow immigrants, including those in the U.S. illegally, to receive extended work permits if sponsored by an employer, even if the sponsorship is terminated or expired.

The leaked memo states that a benefit of the proposed action would be to “authorize the presence of certain individuals who are not here lawfully and address the needs of some of the intended deferred action population.”

The senators charged that such changes would “directly violate” a federal court injunction issued in February suspending Obama’s plan to shield roughly 5 million illegal immigrants from deportation through expansions to a program granting extended work permits.

The executive program, called Deferred Action for Childhood Arrivals (DACA), initially granted temporary two-year legal status to immigrants who were brought to the U.S. illegally as children and attended school in the country.

Twenty-six states filed a lawsuit against the 2014 executive action in a Texas federal court, leading U.S. District Judge Andrew Hanen to issue an order placing the programs on hold.

The senators argued that the leaked DHS document appeared to show that agency officials “actively engaged in attempting to skirt” Hanen’s injunction, constituting “yet another illegal ‘executive action.’”

“The authors of the memo openly acknowledge, and offer as a reason to support the proposal, that granting employment authorization to illegal immigrants under the proposed scheme would accomplish, by different means, the de facto legalization of the population intended to be legalized by the enjoined DAPA program,” they wrote.

The committee gave Johnson until Nov. 12 to respond.

“We want assurances that the administration will refrain from moving forward with any such proposal that harms the integrity of our legal immigration system and violates the law,” they wrote.

The letter was signed by Grassley along with Republican Sens. David Vitter of Louisiana, Orrin Hatch of Utah, John Cornyn of Texas, Jeff Sessions of Alabama, Mike Lee of Utah, David Perdue of Georgia, Thom Tillis of North Carolina, and Ted Cruz of Texas.