Is This the Next Mizzou? As Racial Tensions Rise, Ithaca College President Faces Mounting Criticism 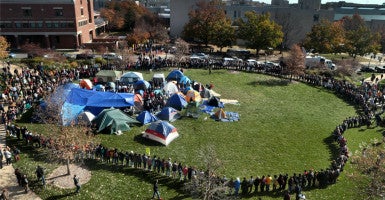 University of Missouri students protested their president's response to racist incidents on the campus. Students at Ithaca College are also protesting how their college's president responded to several "racially charged" events and statements. (Photo: Robert Cohen/TNS/Newscom)

Around a thousand miles northeast of the University of Missouri, where racial tensions and protests led to the resignation of the university president, students and faculty at Ithaca College have mounted a challenge to their own leader following protests over alleged incidents of racism at the small private college.

For months, the college of just 6,600 students nestled in the Finger Lakes has seen mounting criticism of President Tom Rochon for what students and faculty believe is an inadequate response to a number of racist incidents occurring on campus. On Wednesday afternoon, students are expected to hold a “walk-out” in further protest.

“There have been a litany of episodes and incidents during [Rochon’s] tenure here which have led to frustration because, when brought to his attention, the view of the protesters is that he has been unresponsive,” Don Lifton, a 29-year professor at the Ithaca College School of Business, told The Daily Signal.

Now, with the nation focused on events in Missouri, tensions between students and Rochon have come to a head, as students have been asked to participate in a Student Government Association-sanctioned survey asking for a vote of “confidence” or “no confidence” in Rochon, Kyle Stewart, vice president of communications for the Student Government Association, told The Daily Signal.

The Student Government Association voted unanimously to hold the vote for students but is a neutral party, he said.

The vote comes as Ithaca’s Faculty Council, the representative body of the college’s faculty, are scheduled to meet Tuesday night to discuss the possibility of holding their own vote, which, according to Lifton, represents “unprecedented” action taken against Ithaca’s top official.

“Over my years of service here, there have been a variety of presidents each having their strengths and weaknesses, but never has a president during—I’ve been here for three—never had his two predecessors have those amongst us, never has it come to a vote of confidence,” Lifton said.

If both students and faculty cast votes of no confidence in Rochon, it would cause the Ithaca College Board of Trustees—charged with hiring the college president—to re-evaluate Rochon’s future with the college, Stewart and Lifton said.

Rochon became the president of Ithaca College in 2008. In recent years, students have become increasingly unhappy with his leadership following three separate events that students and protesters with People of Color at Ithaca College—a student activist group known as POC at IC—say were perceived as racially charged, Stewart said.

The first involved public safety officers who, during training sessions with Ithaca College resident assistants, allegedly made “racially insensitive” and “aggressive” statements, according to The Ithacan, Ithaca College’s student newspaper.

The second, Stewart said, centered on an off-campus party hosted by an unaffiliated fraternity last month. The party was themed “Preps and Crooks,” and students and alumni viewed the theme, described in a Facebook post, as “racially charged” and a “microaggression,” according to The Ithacan.

The last incident occurred during a university-sponsored event called “Blue Sky Reimagining” last month, where an African-American alumna of Ithaca College said she had a “savage hunger” to succeed in her professional career. A Caucasian Ithaca College alumnus speaking alongside the woman repeated her description, calling the alumna a “savage” multiple times, Stewart said.

“Those were a few of the racial problems on campus,” Stewart, a sophomore, told The Daily Signal.

People of Color at Ithaca College called on Rochon to respond to the incidents and became frustrated when the responses from Ithaca College’s administration were inconsistent, Stewart said.

In the case of the fraternity event, the response from college leadership was swift, and Ithaca distanced itself from both the fraternity and the event, calling the language in a post describing the party “reprehensible for its racial and class stereotyping,” the Ithacan reported.

Ithaca’s response to the comments at Blue Sky Reimagining, however, came days later—and after a video was taken offline.

“There’s definitely tense feelings,” Stewart said. “I think there’s a lot of people who are actively involved in these issues. The group, POC at IC, every day they’re involved with trying to improve the campus climate.”

Perhaps the most telling incident showcasing students’ disapproval of Rochon’s handling of such alleged racism, though, came two weeks ago at a forum hosted by Rochon called “Addressing Community Action on Racism and Cultural Bias.”

Fifteen minutes into the event, attended by thousands of students and faculty, Lifton recalled, 40 students with POC at IC moved down the center aisles shouting chants of “Tom Rochon, no confidence.”

The student activists took the stage—where Rochon sat with other college administrators—and outlined why the college president needed to be removed.

“I never felt there was a danger of violence,” Lifton said. “It was awkward, tense, and unprecedented, but I never felt I was in danger during this protest.”

After the students cleared the stage and left the event—followed by what Lifton estimated to be about half the crowd—the professor himself went to the microphone and made a declaration: for Rochon to step down.

“It’s unfortunate, but we need a fresh face to help us reform,” Lifton said. “He’s been on campus for seven years, and the climate during his watch has deteriorated. There are too many of us who have lost patience with dialoguing with him because the past opportunities of dialogue led to nothing adequately concrete.”

In a statement to The Daily Signal, Ithaca College said issues involving “racial and cultural bias” have garnered the full attention of Rochon but noted that the college has improvements to make.

“Ithaca College must be a caring and inclusive community where all students, faculty, staff and visitors feel safe and respected,” the statement said. “There is no question that the college, like the rest of our nation, has a great deal of work to do to make this happen, including the very urgent need to combat systemic and structural racism.”

The unrest among faculty and students at Ithaca College comes as racial tensions at the University of Missouri in Columbia, Mo., led to university President Tim Wolfe’s resignation.

Similar to the concerns voiced at Ithaca College, University of Missouri students expressed disapproval of Wolfe’s handling of racist incidents, according to the New York Times. Wolfe ultimately stepped down after the university’s football team threatened to boycott the remainder of the season as a gesture of solidarity with students protesting the administration, the Times also reported.

In interviews with The Daily Signal, Stewart and Lifton outlined what students, faculty, and administrators can do to address the racial issues plaguing Ithaca College’s campus.

“I think the main thing the campus needs to work on is respect for everyone. We can’t really move forward as a campus unless every single person respects everyone else regardless of gender, color, sexual orientation,” Stewart said.

And both student and teacher agreed that the events taking place at their college, as well as the University of Missouri and Yale University, speak to a larger, national issue.

“I feel like it reflects a national climate on colleges, especially Missouri and Yale,” Stewart said. “I feel like I’m not sure if we’re any different than other colleges right now, but there’s tension, and we are looking to resolve that in the best way possible.”

“I think that what we have here, lamentably, is systemic of a larger struggle, and that Ithaca College undergraduates would be so engaged in it speaks so commendably to them, all of them,” Lifton said. “I think it’s systematic of larger national issues playing out locally.”