Obama’s Next Act of Executive Overreach 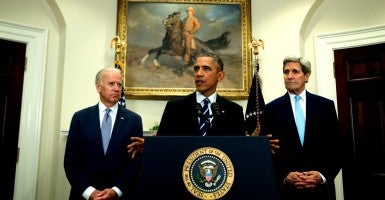 Treating Congress as a nuisance rather than as a co-equal branch of government has been a hallmark of President Obama’s tenure.

When confronted with congressional opposition to his priorities, Obama simply moves ahead with his agenda, stretching executive authority to its constitutional limits and beyond.

More recently, he flat out ignored Congress and struck a deal with the terrorist state of Iran, opting to seek approval from the United Nations rather than from the lawmakers of his own country.

Congressional criticism of these actions has been rife but devoid of any real attempt to assert the authority vested in the legislative branch.

The situation is poised to repeat itself when Obama flies to Paris next month to negotiate a new climate change treaty, which he intends to impose on the United States without the advice and consent of the Senate.

In addition to subverting the constitutional role of the Senate in approving international agreements, the Paris Protocol will cost the taxpayers billions and impoverish poor countries while benefiting big business.

Despite all that, the Senate GOP has been noticeably silent in expressing their disapproval.

At a recent subcommittee hearing in the Senate Foreign Relations Committee dedicated to the topic, a lone GOP senator showed up to ask questions of Todd Stern, the diplomat in charge of the U.S. position in Paris. The other members of the subcommittee—Sens. David Perdue, R-Ga.; Jim Risch, R-Idaho; Jeff Flake, R-Ariz.; and Cory Gardner, R-Colo., were nowhere to be found.

The Democrats, however, showed up in force, with their side of the dais featuring multiple members asking questions intended to support the administration’s attempts to unilaterally commit the U.S. to the agreement without consent from Congress.

Congress Must Be A Check On Executive Power

Congressional Republicans need to put their money where their mouths are. The Founders gave the power of the purse to Congress to provide a check on the whims of the executive.

However, this power is not self-enforcing. For it to work as intended, Congress must assert its role as arbiter of how much of the taxpayer dollars are spent, when, and on what.

Members can take to the floor to gripe all they want about the unilateralism displayed by the president—and indeed, his singular focus on shedding the confines of the Constitution is breathtaking—but until Congress claims its authority as a co-equal branch, the president can do as he likes.

There is a difference between talk and action. If members of Congress truly oppose the actions of the president, they will start showing up to hearings, writing legislation to disapprove executive action, and using the appropriations process as it was intended: for the Congress, not the president, to determine the funding priorities of the country.

Until then, Congress is sure to be a co-equal branch in name only.

This piece was adjusted to state, “When Obama decided he didn’t like the Defense of Marriage Act, his Justice Department stopped defending it in court.”