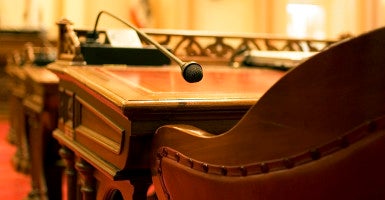 What exactly is the Senate’s role of “Advice and Consent” when it comes to the nominations made by a president? It’s a topic of perpetual debate in Washington.

One wrong-headed argument holds the role to be quite modest: Senators should defer to a president’s choices except in extreme circumstances. That position is advanced far too often by Republicans, and almost never by Democrats (except when a member of their party is doing the nominating). It has led some Republican senators to have a policy against filibustering presidential nominees, no matter how much a nominee’s confirmation may endanger the rule of law and adherence to the constitutional order.

The argument for deference rests on the idea that the president, elected by the people, is entitled to exercise his judgment on who should be officers of the executive branch and judges in the judicial branch, particularly since Article II, Section 2 of the Constitution gives the president the power to make those choices.

But this claim fails to recognize the important difference between executive- and judicial-branch nominations and the separation-of-powers doctrine embedded in the Constitution.

A strong argument can certainly be made that when it comes to nominees who would serve in the executive branch, the Senate should give deference to the president’s choices. Those nominees would be working directly for the president and responsible for implementing his policies and priorities in the branch that he heads.

The exception, of course, is for nominees who do not have the professional qualifications or personal temperament needed for a particular post, who have ethical or legal problems that call into question their ability to hold a position of public trust, or who hold positions so far outside of the mainstream as to disqualify them. This rule of deference is also supported by the fact that a president’s executive-branch nominees serve at the pleasure of the president, and their terms and entitlement to office normally end when the president who nominated them leaves office.

Unlike executive-branch officials, federal judges do not work for the president; neither do they work for Congress. If Congress—specifically the Senate—gives undue deference to a president’s judicial nominees, it cedes tremendous power to the president to shape and control the judiciary, the third branch of government. After all, federal judges have lifetime appointments. They serve long after a president’s term ends and long after that president’s views, policies, and priorities have been replaced by the views, policies, and priorities of a new president elected by the American people.

Our doctrine of separation of powers demands that both the legislative and executive branches have a voice in who become federal judges with lifetime appointments. Otherwise, giving undue deference gives the executive branch too much power over what is supposed to be an independent, separate part of our federal government.

The federal courts, and ultimately the Supreme Court of the United States, are responsible for interpreting the Constitution and saying what the law is. They decide whether actions of the executive and legislative branches are in accord with the limits imposed on their power by the Constitution. Thus, judicial nominations raise far more questions and involve important issues that extend well beyond just the nominee’s professional qualifications and judicial temperament.

The Senate has an absolute duty to delve deeply into the judicial philosophy of such nominees. The Senate must ensure that any nominee’s past history and prior statements demonstrate an uncompromising fidelity to the Constitution as written. These days, all nominees profess that fidelity because their handlers tell them they must do so to get confirmed. It is up to the Senate to investigate the credibility of such claims based on the nominee’s overall record, a record that provides actual evidence of his or her view of the Constitution and the rule of law.

For senators, this duty doesn’t disappear just because a judicial candidate has been nominated by a president of their own party. Giving deference to the president is one of the reasons why Republican senators have approved disastrous picks like former Supreme Court justice David Souter, a George H. W. Bush appointee.

Individuals who will not enforce the limits imposed on the power of the government and believe that federal judges have a right to impose their own personal ideology and social views on the people, regardless of what the Constitution or federal law say, should not be confirmed—no matter how substantial their professional qualifications are or how much the president agrees with those views.