Why Abortion Survivors’ Stories Should Be Heard 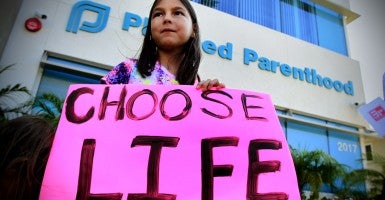 11-year-old Laura Yi of Tierrasanta was one of between 150-200 pro-life supporters who gathered in front of the Planned Parenthood offices in Bankers Hill, protesting Planned Parenthood who is accused of selling aborted fetal tissue for profit. (Photo: Howard Lipin/Twitter: @Hlipin/ZUMA Press/Newscom/ Edited Daily Signal)

The national frenzy over Planned Parenthood has died down somewhat since the House Oversight Committee hearing that occurred more than a month ago.

News headlines have shifted from the testimony of Planned Parenthood President Cecile Richards to the latest developments in the race for president. However, as the media spotlight has shifted, I am still amazed at what the intense media coverage missed in the public debate on abortion.

Richards wasn’t the only individual who testified before the congressional committee on the Planned Parenthood issue.

Both of these women survived a saline abortion. This procedure involves injecting a toxic salt solution into the amniotic fluid surrounding the unborn child, burning it to death from the outside in. The gruesome photo accompanying Gianna’s testimony indicates the intense trauma this normally fatal procedure inflicts on an unborn child.

I tried to reconcile these women’s testimonies with how we think of abortion today. We are told that abortion is about “a woman’s right to choose” and that we should not tell women “what to do with their own bodies.” I struggled to reconcile these catch-phrases with Gianna’s impassioned question to the House Judiciary Committee—“If abortion is about women’s rights, then what were mine?” The answer to her question is simple: she had no rights. As the law stands, the unborn have no rights which we who are born are bound to respect.

Later, Melissa Ohden testified. As part of her Abortion Survivors Network, she has reached out to 203 fellow abortion survivors, and is still looking for others. At what point did these abortion survivors gain their humanity? Does the fact they survived death in the womb imply they were alive in the womb? And if they were alive, when do they gain the natural rights of human beings?

Perhaps, in the midst of America’s pursuit of happiness, it is time to consider the right to life of embryos like Gianna and Melissa. To use Melissa’s own words, “I deserved the same right to life, the same equal protection under the law as each and every one of you.”