19 Million People Have Watched This Senator’s Speech. How Did It Go Viral? 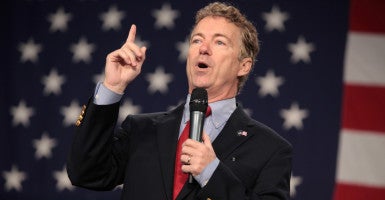 Lee, R-Utah, slammed lawmakers for pushing through the budget deal at 3 a.m. Friday, which he said “steals” $150 billion from Social Security. He thanked Paul, R-Ky., for leading the push to protect the program from the “thieves in Washington.”

This is how it happens. Last night while you were sleeping the Senate voted to steal $150 billion dollars from the…

“The American people are fed up,” Lee said in a statement Monday. “The mainstream media did not want to tell the truth about what was in this budget deal. But in the era of social media, you can no longer hide votes for bad policy in the middle of the night. The American people will find out.”

Lee’s post instantly became one of the most viral social media posts from a political figure in 2015, outpacing even President Barack Obama, whose most popular Facebook video received 1.6 million views.

The post has also been shared more than a million times. Lee attributed its popularity to Americans’ frustration with the government and Congress’ attempt to pass the controversial deal “in the darkness of night.”

“Senator Paul and I aren’t going viral. You are,” Lee commented on the post. “The American people are going viral, and this is the virus that the Washington Establishment thought they were inoculating themselves against by hiding their vote.”

He continued that the Senate attempted to bury the vote in the chaos surrounding the race for House speaker and the Republican presidential debate, which aired two days before the vote took place.

“The smokescreens didn’t work,” he said.

Lee and Paul were among the 35 senators who attempted to block the bill from moving forward.

The legislation ultimately passed with 64 senators voting in support, effectively raising spending caps and suspending the debt limit until March 2017.