Why Did the Environmental Protection Agency Spend $1.4 Million on Guns? 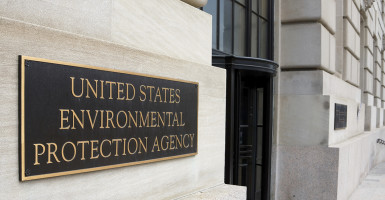 Open the Books found that the agency has spent millions of dollars over the last decade on guns, ammo, body armor, camouflage equipment, unmanned aircraft, amphibious assault ships, radar and night-vision gear, and other military-style weaponry and surveillance activities.(Photo: Skyhobo/iStock)

Even those of us who have worked in Washington for many years and become accustomed to the inner workings of government can still be amazed by what lurks behind the curtain sometimes. Case in point: the Environmental Protection Agency.

Most Americans have at least heard of the EPA, even if they have only a dim notion of what the agency actually does. It tends to skate along under the radar, unless something unusual happens, such as the toxic spill that turned the Colorado’s Animas River orange last August. Of course, what really made the spill unusual is that the EPA itself caused it.

Otherwise, Americans don’t hear much about the agency. So many of them would probably be as unpleasantly surprised as I was by a new report by Open the Books, a nonprofit group that promotes government transparency. Its look into the EPA’s spending habits is alarming, to put it mildly.

The first thing that strikes you is the EPA’s spendthrift ways. Even if times were flush and government coffers were overflowing (which is far from the case), the agency spends money like it’s expecting the Second Coming next week. The Open the Books audit covered tens of thousands of checks the EPA wrote from 2000 to 2014, with hundreds of millions going toward such things as luxury furnishings, sports equipment, and “environmental justice” grants to raise awareness of global warming.

The second thing that hits you is where the rest of the money goes. The headline of an op-ed by economist Stephen Moore in Investor’s Business Daily sums it up well: “Why Does the EPA Need Guns, Ammo, and Armor to Protect the Environment?”

And not just a few weapons. Open the Books found that the agency has spent millions of dollars over the last decade on guns, ammo, body armor, camouflage equipment, unmanned aircraft, amphibious assault ships, radar and night-vision gear, and other military-style weaponry and surveillance activities.

“We were shocked ourselves to find these kinds of pervasive expenditures at an agency that is supposed to be involved in clean air and clean water,” said Open the Books founder Adam Andrzejewski. “Some of these weapons are for full-scale military operations.”

Among the EPA’s purchases:

The list goes on. It’s filled with the kind of equipment you’d expect to be purchased by the Bureau of Alcohol, Tobacco, Firearms and Explosives, not an agency ostensibly designed to protect the environment.

But as it turns out, armed, commando-style raids by the EPA are not unheard of. One such raid occurred in 2013, in a small Alaskan town where armed agents in full body armor reportedly confronted local miners accused of polluting local waters. Perhaps the agency is gearing up for more operations like that one?

If so, the EPA wouldn’t be all that unique. According to the Justice Department, there are now 40 federal agencies with more than 100,000 officers authorized to carry guns and make arrests. They include the National Park Service, the U.S. Fish and Wildlife Service, the Bureau of Land Management, and the National Oceanic and Atmospheric Administration.

The EPA audit underscores the need for serious budget cuts at the agency. In July, before the Colorado spill and the Open the Books report, environmental policy expert Nicolas Loris called on Congress to shrink the EPA’s budget, outlining several specific cuts that could be done immediately and with no detrimental effect on the environment.

“The proposed cuts outlined here merely scratch the surface of a rogue agency that has wildly spent and regulated outside its purview,” Loris concluded. After reviewing the Open the Books report, who can disagree?