How Many Concerts Would Taylor Swift Have to Perform to Pay Off One Day’s Interest on the Debt? 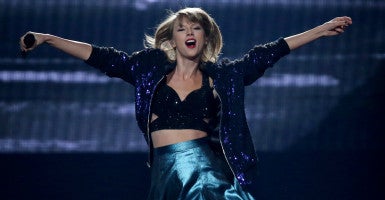 If Taylor Swift decided she’d help Uncle Sam with some of those interest payments on our $18.1 trillion national debt, she’d have to do a lot of concerts. And what if famous boxer Floyd Mayweather wanted to pay off our whole debt? Well, let’s hope he knows the secret for how to live a few centuries. What if Green Bay Packers quarterback Aaron Rodgers decided he wanted to help out and pay off some of the debt? OK, OK, but let’s say some other rich folks got in the game. Let’s look at Bill Gates, the world’s richest person. Would he have close to enough? So surely since we’re in so much debt, we’re at least making sure we’re not adding to that debt at a significant rate, right? And if we keep up with this … the long-term outlook isn’t great. But the newest budget deal, pushed by President Barack Obama and House Speaker John Boehner, just boosts the debt limit by $1.5 trillion. And it does so by putting off savings until further in the future. So I guess we’re banking on Taylor Swift deciding some day she’s a workaholic … and only working to help pay off the interest of the national debt.

This article has been corrected to reflect how much the proposed increase would make the national debt.