How the House’s Partial Repeal of Obamacare Could Backfire 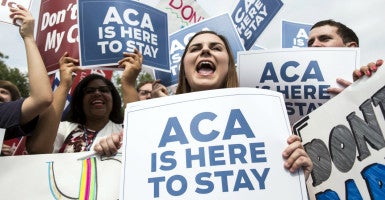 The Affordable Care Act isn't here to stay. But the current approach to repeal is problematic. (Photo: Joshua Roberts/Reuters/Newscom)

Michael F. Cannon is director of health policy studies at the libertarian Cato Institute and a former domestic policy analyst for the Senate leadership.

Public opposition to Obamacare has lasted far longer than its authors imagined. Unsubsidized consumers avoid Obamacare coverage. Twenty states have rejected its Medicaid expansion. Congress wants to repeal it. President Obama and the Supreme Court have repeatedly amended and expanded it, transforming the statute Congress enacted into an illegitimate law that no Congress ever had the votes to pass, and making repeal not just an economic imperative, but necessary to restore the Constitution’s system of checks and balances.

As early as this week, the House could consider a reconciliation bill that repeals only parts of Obamacare, leaving many of its taxes in place. Not only do more Americans oppose that approach than oppose Obamacare itself, but the Supreme Court’s recent King v. Burwell ruling shows why a full-repeal bill is more likely to reach the president’s desk. Indeed, unlike partial repeal, Senate leaders can all but guarantee that full repeal can pass the Senate with just 51 votes.

Repeal enjoys majority support in both the House and Senate, yet it lacks the 60 votes necessary to overcome a Senate filibuster. Senate leaders have therefore vowed to use the budget reconciliation process—which allows legislation to clear the Senate with just 51 votes—to repeal Obamacare, just as Congress used reconciliation to ensure Obamacare’s final passage.

House leaders shied away from full repeal, however, partially out of fear that the Senate cannot deliver. Under Senate rules, a reconciliation bill can contain only budgetary provisions. For instance, if the parliamentarian rules that a provision’s budgetary effect would only be incidental to its primary effect, the provision needs 60 votes to pass the Senate.

Ironically, the House’s partial-repeal approach—which repeals the individual and employer mandates in isolation, and reduces net spending by just $276 billion over 10 years—is more likely to run afoul of Senate rules than full repeal. Direct cuts account for just $13 billion of that bill’s net spending reduction. The other 95 percent comes from indirect (read: incidental) behavioral effects of repealing those mandates.

A full-repeal bill, by contrast, would recognize that Obamacare creates a single, integrated program of taxes and subsidies that work in concert to expand coverage and would eliminate that entire program as a whole. Its primary effect would be budgetary. According to the Congressional Budget Office (CBO), full repeal would eliminate $1.7 trillion of spending and “would reduce deficits during the first half of the decade.” Retaining Obamacare’s spending cuts would ensure that repeal reduces deficits in perpetuity.

Opponents will try to argue that repealing Obamacare’s health insurance regulations (e.g., community rating) would have only an incidental effect on the budget. Yet those regulations are merely part of that larger, integrated program to expand coverage: community rating taxes the healthy to subsidize the sick; the individual mandate enforces those transfers by making part of that implicit tax explicit; additional regulations further enforce that implicit tax; explicit premium subsidies reduce those implicit taxes, and supplement the implicit subsidies, for low-income taxpayers; and the employer mandate imposes an implicit tax on workers that both reduces and offsets direct spending on premium subsidies.

Every relevant authority has held that these provisions were designed to create a single, integrated program of taxes and transfers and has rejected attempts to isolate those regulations from other parts of that program.

Obamacare’s authors, including Harry Reid and Nancy Pelosi, filed a brief in King v. Burwell where they flatly rejected the idea that those regulations are, or were intended to be, separable from the statute’s “interdependent statutory scheme.”

The Obama administration argued in King that these regulations are part of an “interdependent,” “interlocking,” and “integrated” set of measures that are “designed to function together” as “a comprehensive program”—as evidenced by the fact that “they would take effect on the same date, January 1, 2014.” In NFIB v. Sebelius, the administration argued that “the guaranteed-issue and community-rating provisions … are inseverable from” the individual mandate.

In NFIB, the Supreme Court held that Obamacare creates “a comprehensive national plan to provide universal health insurance coverage.” In King, the Court—including all four Democratic appointees—explicitly rejected the argument that these regulations are separable from the broader coverage-expansion scheme. Those regulations, the Court wrote, are part of an “interlocking” and “intertwined” system that “would not work” without all of its component parts. Echoing Obamacare’s authors, the Court held that it is “implausible” that Congress saw these regulations as independent or separable.

In 2009, the CBO concluded that this system is so comprehensive that it very nearly transforms all private insurance into “an essentially governmental program” where “all payments related to health insurance policies should be recorded as cash flows in the federal budget.” The CBO admitted that its determination that “the insurance market [under Obamacare] should [still] be considered part of the private sector” was both subjective and a close call. The fact that it was even a close call shows that these regulations are part of a single, integrated program that converts insurers into something close to government-sponsored entities.

To treat Obamacare’s health insurance regulations as separate from that larger scheme is to renounce the Supreme Court’s King ruling and everything Obamacare’s authors have said about how the law works. It would amount, to quote the Obama administration, to “seizing on isolated phrases [and] giving them a meaning divorced from statutory context [to] advance a radically different conception of the Act’s operation.”

The Senate Budget Committee can further clarify that these provisions create one integrated program. First, it can ask the CBO to score Obamacare as it scored President Clinton’s essentially identical proposal in 1994, with “all payments related to health insurance policies … recorded as cash flows in the federal budget.” Second, it can adopt that score as the baseline against which the Senate considers reconciliation. Using that baseline would show that Obamacare’s regulations are merely components of a larger program, that all financial effects of repeal would be budgetary, and that Congress may repeal those regulations via reconciliation just as it can repeal rules regulating any other government spending Congress zeroes out through that process.

If Congress establishes this year that it can fully repeal Obamacare via reconciliation, and the next president is willing, Congress could repeal Obamacare for good in 2017. To that end, passing a full-repeal bill, forcing President Obama to veto it, and holding override votes would further delegitimize this illegitimate law and make Obamacare a central focus of the presidential election.

Originally published in The Hill.