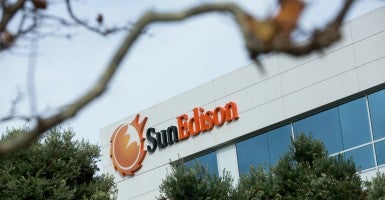 SunEdison has received at least $2.84 million in taxpayer money from the federal government.(Photo: Kris Tripplaar/Sipa USA/Newscom)

Two weeks ago, Watchdog.org reported that SunEdison, which bills itself as the world’s largest global renewable energy development company, had received at least $2.84 million in taxpayer money from the federal government.

But a deeper look from the U.S. Department of Energy shows that the company, which has been going through financial difficulties, has received $4.59 million.

After Watchdog.org requested that the DOE comb through its records of renewable energy grants and loans, the agency said SunEdison picked up what’s called a a cooperative agreement for $1,750,125 to help improve next-generation semiconductor materials.

Under the payment structure of a cooperative award, SunEdison is reimbursed for all allowable expenses while being required to meet agreements to share costs.

In June, SunEdison announced it was selling off its stake in its semiconductor business for $193 million.

“It’s been on multiple fronts where they’ve been favored by government subsidies,” said William Yeatman, senior fellow at the Competitive Enterprise Institute, an organization that calls for free-market solutions to energy and environmental issues.

“This is the inherent danger, the inherent uncertainty, of any industry which fundamentally the success of their industry is based on preferential treatment from politicians,” Yeatman said in a recent interview.

A look at the spreadsheet tracking the nearly 9,800 entities that got stimulus dollars through the Treasury Department’s 1603 program shows SunEdison received funding for projects in five different states:

The company also picked up $992,000 from the Obama administration in September 2009 for a 443-kilowatt photovoltaic system at Owens Corning’s facility in Kearney, New Jersey. Watchdog.org could not determine if the $992,000 was separate from or a part of the $778,734 grant SunEdison received from the stimulus grant it got from New Jersey in 2013.

SunEdison is far from the only big renewable energy company that has received federal money. In fact, by the standards of some companies that famously flopped—such as Solyndra—the taxpayer investment thus far for SunEdison is small.

As reported earlier this year by Watchdog.org, renewable energy multinational Abengoa, based in Spain, has received an estimated $2.9 billion in grants and loan guarantees—that’s billion with a “b”—through the Department of Energy to undertake solar projects in three different states.

Abengoa is also struggling. Its stock has plummeted from $29.32 about a year ago to $5.16 a share on Monday. The company’s market cap has tumbled from more than $9 billion just three months ago to $2.6 billion, and it has announced it will lay off about 15 percent of its 7,300 employees.

SunEdison has received a mixture of good and bad news in the past 10 days.

On the positive side, it announced last week a 2.8-megawatt solar project for eight schools in the Montgomery County Public School system in Maryland.

But on the negative side, the Wall Street Journal reported Oct. 9 that an insolvent solar panel installer based in the United Kingdom, Mark Group Ltd., laid off more than 900 people. Sun Edison bought Mark Group in July.

“We have more than enough cash flow left to service our obligation in our upcoming maturities,” SunEdison CFO Brian Wuebbels told financial analysts in a conference call Oct. 7.

“We are also optimistic about the long-term outlook for renewable energy and the incredible value and our focus there,” CEO Ahmad Chatila said.