Several States Launch New Lawsuit Against Obamacare. Here’s Why It Will Likely Go to the Supreme Court. 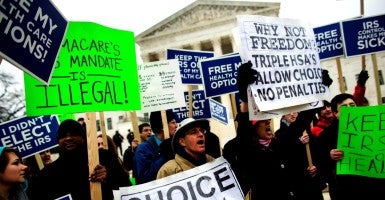 Thought the litigation battle over Obamacare was over? Think again. Texas, Kansas, and Louisiana are about to file a new lawsuit against Obamacare, claiming that a fee being imposed by the IRS as a condition of states continuing to receive Medicaid funds is both unconstitutional and a violation of federal law. And they are in discussions with more than a dozen other states about joining this new lawsuit.

The complaint, which Texas plans to file in federal court in the Northern District of Texas on Wednesday, explains that all fifty states use managed care organizations to provide a portion of their Medicaid services. Medicaid is the federal program that provides health coverage for low-income families, children (the Children’s Health Insurance Program or CHIP), and the disabled, among others.

The states pay those organizations a monthly rate, like an insurance premium, for every Medicaid enrollee they cover.

Because Medicaid is an entitlement program, states cannot limit the number of eligible people who can enroll, and they have to pay for all services covered under the Medicaid program.

An Expensive Fee Levied Against States

The Centers for Medicare and Medicaid Services, which is the federal agency that administers federal health insurance programs like Medicare and Medicaid, has a rule that requires states to pay their Medicaid managed care organizations “actuarially sound rates” to cover the health services provided. That rule also delegates the decision of what is an “actuarially sound rate” to the Actuarial Standards Board, a private, non-governmental entity.

The Obamacare law—the Patient Protection and Affordable Care Act—which was previously upheld by the U.S. Supreme Court in 2012 in NFIB v. Sibelius, imposes a “Health Insurance Providers Fee” on private insurers to help pay for the subsidies provided by the federal government to individuals purchasing health insurance.

In 2014, the total amount of that fee imposed on all insurers was $8 billion, according to the lawsuit; it is expected to increase to $14.3 billion by 2018. The Actuarial Standards Board decided that the “actuarially sound rate” paid by states to their Medicaid managed care organizations must include their portion of the Health Insurance Providers Fee.

No Clear Notice Given to States

Further, the federal government didn’t even provide notice of this “by rule”; instead, notice was “ultimately provided by a private entity wielding legislative authority that the Department of Health and Human Services delegated.”

It is important to note that this lawsuit is not over the Medicaid expansion that was part of the Obamacare law and that states like Texas refused to accept. This is about a fee that the Obama administration, through the IRS, is now imposing on states as a condition of continuing to receive federal funds for the basic Medicaid and CHIP programs.

The Actuarial Standards Board Fee Could be Unconstitutional

The states claim that this violates several principles. First of all, allowing the Actuarial Standards Board to impose this fee on the states violates the basic constitutional principle, upheld in a number of cases, that “[f]ederal lawmakers cannot delegate regulatory authority to a private entity.” And the cost is substantial; Texas claims that the fee it paid for 2013 was $84.6 million, while Louisiana claims that its portion of the fee for 2014 was $31.3 million. The lawsuit projects that the federal government will collect between $13 and $15 billion from the states over the next decade.

Second, there is nothing in the text of the Obamacare law that allows the federal government to collect this fee from the states, violating the constitutional requirement of “clear notice.”

Third, the states cite the NFIB v. Sibelius decision, where the Supreme Court held that the federal government could not force the states to accept expanded Medicaid coverage as a condition of receiving any Medicaid funding: “The threatened loss of over 10 percent of a State’s overall budget, in contrast, is economic dragooning that leaves the States with no real option but to acquiesce in the Medicaid expansion.” Thus, the states claim the provider fee unconstitutionally coerces the sovereign states.

An Unconstitutional Tax on States

The states also have inserted a Tenth Amendment claim into the lawsuit. They argue that the fee is “an unconstitutional tax on the Plaintiff States in violation of the Tenth Amendment of the United States Constitution and the doctrine of intergovernmental tax immunity.”

In other words, in our federalist system, the federal government has no right to tax state governments.

Finally, the states have made a claim under the Administrative Procedure Act, the federal law governing the promulgation of new regulations by the federal government. The states argue that the rule imposing the fee is arbitrary and capricious and an abuse of discretion.

In addition to asking for declaratory relief and an injunction against enforcement of the fee, the states are asking for a complete refund of all fees already paid, including interest.

A Substantive Case Against Obamacare

There is no question that this is a serious lawsuit raising substantive issues against the Obamacare law and the way it has been implemented in relation to Medicaid and other federal health insurance programs.

A win by the states could knock a substantial hole in the financing of the Obamacare program. The question now is how quickly the case will move through the courts, and how many other states will join the suit.

One thing is for sure: this case is almost guaranteed to end up at the U.S. Supreme Court, where Chief Justice John Roberts and the rest of the Court will have another opportunity to opine on the law.