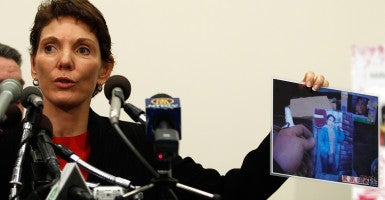 As of Sept. 25, China’s so-called “one-child policy” has officially been in effect for 35 years.

On Oct. 11, Littlejohn observed the third anniversary of a campaign her organization, Women’s Rights Without Frontiers, launched to protect women and female children from that same Chinese policy, notably through the “Save a Girl” campaign.

According to Littlejohn, the one-child policy, infamous for requiring a woman to obtain a birth permit before having a child in order to combat overpopulation, represents the “greatest form of violence against women and girls in the world.”

While the policy has been modified over the years to allow for a family to have two children in certain instances, such as when one or both parents are themselves only children, Littlejohn says it has also led to the prevention or abortion of up to 400 million lives, as well as a demographic gender imbalance due to sex selection and the highest female suicide rate in the world.

“Women are pressured, usually by their in-laws, to abort or abandon baby girls,” Littlejohn explains. “So what does that do to woman’s own feeling of her self-worth, if she has aborted or abandoned her baby specifically because she is female?”

What’s worse, according to Littlejohn, are the practices of China’s Family Planning officials, those men and women who enforce the policy via forcible sterilization or abortion.

Littlejohn, a graduate of Yale Law School, first became aware of these practices during a pro bono representation of a Chinese refugee who had been forcibly sterilized. At the time, Littlejohn was an intellectual property lawyer working in San Francisco. She abandoned that work to found and promote Women’s Rights Without Frontiers.

“We’re trying to end coercive population control,” Littlejohn says. “China is unique in the sense that it will be government officials tracking women’s menstrual cycles, giving them cervical checks, and, if they’re illegally pregnant, dragging them out for forced abortions.”

Littlejohn herself met with three women who underwent such forced abortions, later testifying before the U.S. Congress and European Parliament. She has also briefed officials at the White House, U.S. Department of State, United Nations, and Vatican on the increasingly dire situation that she calls “gendercide.”

Her “Save a Girl” campaign has, through volunteers in China who both encourage women not to abort female babies and provide help to those being pressured by the government, saved the lives of roughly 200 Chinese infants.

While China formally denies that procedures like forced abortion take place, expert Olivia Enos cites reports from refugees and aid workers on the ground in China as evidence of human rights abuses.

“Individuals are targeted, and their whole families are targeted [based on this policy],” says Enos, a research associate with The Heritage Foundation’s Asian Studies Center. “They’re blackmailed and threatened with imprisonment if they don’t abort their children.”

Enos adds that the social and financial ramifications of being in violation of the one-child policy, enacted according to a quota system, can also be devastating.

“[China] has engineered a social structure where individuals that have a child, even if it’s their first child, if they haven’t received a birth quota from the government, the population control police will come after them,” Enos says.

Littlejohn is currently focusing on disproving the myth that a Chinese decision to alter the country’s family policy to a universal two-child rule would translate to protection for women and children.

“I believe that because of the demographic disaster they are facing, they will probably move to a two-child policy pretty soon,” Littlejohn says. “That will not end forced abortion in China. The core of the policy is not whether China allows a woman to have one child or two children. The core of the policy is the fact that the government is telling women how many children they can have and enforcing that limit through forced abortion, forced sterilization, and forced contraception.”