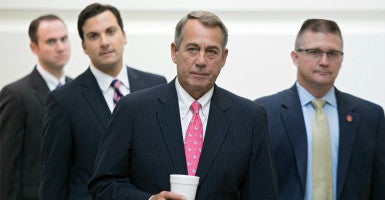 House Speaker John Boehner’s chief of staff has made reauthorizing the Export-Import Bank one of his top priorities for October.

Mike Sommers, Boehner’s chief of staff, spoke to attendees of a policy discussion hosted by the Main Street Partnership last week, according to the group’s Twitter account. In the discussion, Sommers highlighted two goals for October: raising the debt ceiling, which the federal government will hit Nov. 3, and reauthorizing the Export-Import Bank.

Sommers – "Main Street is so very valuable in electing and supporting Republicans that can govern." #MSPpolicy @SpeakerBoehner

In a statement to The Daily Signal, Boehner spokeswoman Emily Schillinger said the speaker believes Ex-Im’s future should be decided through regular legislative process.

“The speaker has long believed that this issue should be worked out through regular order at the Financial Services Committee,” she said.

Ex-Im’s charter expired June 30, and moderate Republicans and Democrats have been pushing for Congress to reauthorize the bank. Earlier this month, more than 40 GOP lawmakers teamed up with their colleagues across the aisle to sign a discharge petition, a rarely successful tool that would force a vote on legislation reauthorizing Ex-Im.

The discharge petition received the 218 signatures needed to advance, and the House is expected to vote Oct. 26 on the legislation bringing the bank back to life.

During debate over Ex-Im’s reauthorization earlier this year, Boehner declined to publicly take a stance on its future. Though he did say in April the bank’s expiration could put “thousands” of jobs at risk, Boehner also deferred to House Financial Services Chairman Jeb Hensarling and said he would support “any plan” that passed Hensarling’s committee.

Boehner’s decision to leave Congress, which is supposed to happen on Oct. 30, has breathed new life into the debate over the the 81-year-old agency’s future. After the Ohio Republican announced he was stepping down, conservatives pushed for Ex-Im’s charter to remain expired.