Why Police Can (Legally) Seize Your Cash 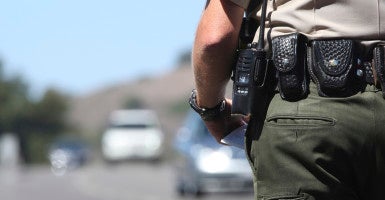 Not many people make a habit of carrying large amounts of cash around. After all, thieves could steal it. How ironic, then, that a growing threat to your money is the people you’d call if your money was stolen: the police.

And all because of a little-known law-enforcement tool known as civil forfeiture. It allows police departments to keep the proceeds from whatever property they seize in the course of conducting an investigation or making an arrest.

You might think this means the police are simply taking huge wads of cash off drug dealers who merit little sympathy. Unfortunately, it doesn’t always work like that. Many victims of forfeiture abuse are not criminals at all, but ordinary people who happen to be carrying a large amount of cash at the wrong time and place.

Indeed, it has become such a serious problem that The Heritage Foundation and the American Civil Liberties Union, despite deep differences on many issues, joined forces to call for civil forfeiture reform. Writing last month in The Des Moines Register, ACLU President Susan Herman and John Malcolm, head of Heritage’s Meese Center for Legal and Judicial Studies, said the problem “undermines the integrity of our justice system.”

They relate a story familiar to anyone who follows this issue:

When Victor Guzman and his brother-in-law, Jose Sorto, were pulled over for speeding on Interstate 95 near Richmond, Va., the pair expected a ticket. Guzman, a native of El Salvador, had been entrusted with $28,500 by his church to handle purchases for his parish, including buying land in El Salvador. He and Sorto were driving to Atlanta that day to meet the landowner, money in hand.

But the money was soon in police hands. Despite finding no drugs or evidence of illegal conduct, Virginia troopers seized the cash under civil asset forfeiture laws. The only justification given was that the pair was acting suspiciously because Guzman, for whom English is a second language, and Sorto, who speaks no English, had made statements the officers considered inconsistent.

Like many Americans, I want police to be able to stop criminal activity. Their hands shouldn’t be tied by unreasonably restrictive laws that make it all but impossible to do their jobs. But in the case of civil forfeiture, the pendulum has swung too far the other way. Here is a classic case of “presumed guilty until proven innocent.”

I wish the Guzman-Sorto incident was an isolated one, but it’s not. The Meese Center has been compiling a database of such stories—60 accounts of ordinary men and women who have had assets seized despite there being little or no evidence that these assets were connected in any way to criminal activity.

The list goes on. “Many eventually won the return of their property, often at great personal and financial cost,” writes legal expert Jason Snead. “Others, sadly, had to walk away penniless because of arbitrary filing deadlines or their own inability to afford a lawyer.”

Civil forfeiture has its place, but reform is long overdue (beyond the progress made by several states). Malcolm and Herman recommend, for example, barring law enforcement agencies from retaining the proceeds of their own seizures and guaranteeing indigent property owners an attorney.