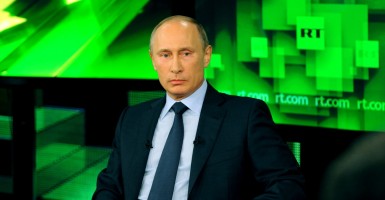 The Russian government has launched an all-out media campaign to sell its involvement in Syria to the Russian people. On all official television channels (which are pretty much the only ones in Russia that count), viewers have been subjected to a nonstop barrage of the Russian bombing campaign over the past two weeks.

Bombers are seen flying sorties over Syrian targets; targets are destroyed with precision-guided munitions and filmed by onboard cameras; exciting camera angles record fighters as they swoop through Syrian skies.

The message to the Russian domestic audience is loud and clear: Russian President Vladimir Putin and Russia’s powerful military are engaged in a heroic battle to save the day and destroy the bad guys—i.e., the Islamic State and other terrorist groups.

Unfortunately, this is not exactly in tune with the reality Western analysts are seeing.

As Russians at home have grown weary of the war with Ukraine and also feel the pinch of falling oil prices, this new Syrian engagement has provided a distraction from Russia’s internal woes.

In a twisted sort of way, the colorful and slick Russian media campaign is reminiscent of the U.S. policy of embedding journalists during Operation Shock and Awe, which led to the ouster of Iraqi dictator Saddam Hussein in 2003.

But there is a crucial difference. The American media, which was offered a front row seat in the Second Gulf War, is independent of the U.S. government. Western media also tends to have a highly antagonistic posture toward the Pentagon. Reporters’ natural bias is against Washington, not in favor of it.

By contrast, the Russia media, particularly television, is nothing less than a mouthpiece for the Russian government and an arm of the Kremlin’s propaganda machine. It is therefore broadcasting an orchestrated and full-throated glorification of events in Syria. There is no suggestion that Putin might have other motives, such as be seeking to secure Russia’s own military installations, protect Russian supply lines in Syria, or pushing back against American involvement in Syria.

Putin’s considerable skills as a propagandist are well-documented. Important insights into Russia’s information war were provided by British journalist Peter Pomerantsev, who, having worked for the Russian propaganda organ Russia Today, wrote the seminal book about his experience, “Nothing Is True and Everything Is Possible.”

For the Kremlin, that is as true in Syria as it was in Crimea. For now, the Russian propaganda machine has a different target, but it is working as hard as ever.