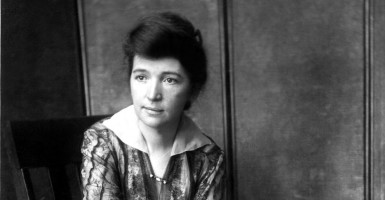 Lawmakers have requested that a bust of Margaret Sanger, the founder of Planned Parenthood, be removed from the National Portrait Gallery.

In a joint statement, Cruz and Gohmert called for “the immediate removal” of the bust from the exhibit.

“There is no ambiguity in what Margaret Sanger’s bust represents: hatred, racism, and the destruction of unborn life,” Cruz said. “Not only should we continue efforts to redirect funds from Planned Parenthood, an organization founded by Sanger that is currently under criminal investigation, we must also work to ensure that her inhumane life’s work is in no way promoted.”

“It is a complete and utter outrage to display a bust of Margaret Sanger in the National Portrait Gallery,” Gohmert said. “In addition to this, it is appalling to honor her as part of the ‘Struggle for Justice’ collection. One of the founders of Planned Parenthood, Mrs. Sanger portrayed deep-rooted racism by advocating birth control as a method for controlling the population of minorities. This prejudice must not be celebrated or exalted. Her bust should be removed not only from the exhibit but from the National Portrait Gallery altogether, since her legacy is one of prejudice against minorities and widespread destruction of their unborn human lives.”

The bust of Sanger is currently displayed in the National Portrait Gallery’s “Struggle for Justice” exhibit alongside prominent figures in American history such as Martin Luther King Jr. and Rosa Parks.

The exhibit’s website praises Sanger’s “crusade” against “laws forbidding dissemination of contraceptive information.” It acknowledges her “association with the eugenics movement” but argues that eugenics was a viewpoint that was “endorsed by many of the era’s prominent thinkers.”

Eugenics is the philosophy that society can be perfected by preventing those deemed unfit from having children. Sanger, an advocate of the philosophy, wrote in her book “Woman and the New Race” that population control methods such as birth control would bring about the “materials of a new race.”

“Birth control itself, often denounced as a violation of natural law, is nothing more or less than the facilitation of the process of weeding out the unfit, of preventing the birth of defectives or of those who will become defectives,” Sanger wrote.

The Daily Signal previously reported that a group of pro-life leaders led by African-American ministers asked the National Portrait Gallery to remove the bust in August. Over 13,000 people signed their petition. At the time, the museum declined to remove the bust.

A spokesperson for the National Portrait Gallery did not immediately return The Daily Signal’s request for comment.

According to Planned Parenthood’s website, the organization “dates its beginnings to 1916 when Sanger, her sister, and a friend open[ed] America’s first birth control clinic in Brooklyn, New York.”