Why Congress Must Work to Balance the Budget 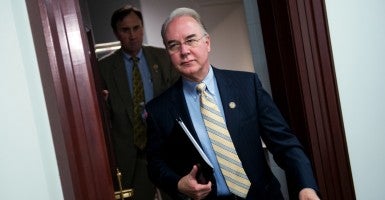 Important budget questions were discussed this week at a widely attended event by the Institute to Reduce Spending that featured Chairman of the House Budget Committee Dr. Tom Price, R-Ga., as well as a panel of experts (I was delighted to be among the panelists). This message can get lost in discussions over the latest deficit or debt number. It’s important that we be reminded that budget debates are ultimately about what’s best for the country.

The event comes at a time when Congress is faced with the debt limit, the imminent highway trust fund shortfall, and an expiring continuing resolution to fund government agencies—all before Christmas. As Congress lurches from crisis to crisis, real fiscal reform remains elusive. This is not for a lack of solutions, but for a lack of will.

Price was not shy in telling the audience that although Congress passed a budget that would cut more than $5 trillion in projected spending over the next decade to reach balance, the ugly fact is that Congress was not following its budget. Automatic spending on Medicare, Social Security, Medicare, and Obamacare present the greatest challenge because Congress allows this spending to grow uncontrolled.

A key theme that emerged from the event was that many U.S. states, as well as nations around the globe, use fiscal rules to control spending and debt.

Among the other panelists were Dr. Barry Poulson, professor emeritus of economics at the University of Colorado-Boulder, who shared a new fiscal rule designed for the U.S. based on the successful Swiss spending brake (a report from the Institute to Reduce Spending is forthcoming), and Jonathan Williams, director of the Tax and Fiscal Policy Task Force for the American Legislative Exchange Council (ALEC), who shared success stories from the states, highlighting Colorado and its model fiscal rule (TABOR) in particular.

Getting Congress to move from promises to actually adhering to its budget will be a tough battle. However, it is a battle of utmost importance, and absolutely worthwhile. The future of the country is at stake. We have a moral obligation to ensure that future generations are able to enjoy the same or better opportunities than those who came before them did.