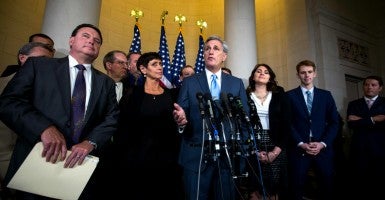 House Republican Leader Kevin McCarthy speaks to the media after unexpectedly dropping out of consideration to be the next Speaker of the House on Capitol Hill in Washington, DC, USA, 08 October 2015. (Photo: Jim Lo Scalzo/EPA/Newscom)

When Rep. John Boehner, R-Ohio, announced he would resign as speaker, conventional wisdom in Washington dictated Rep. Kevin McCarthy, R-Calif., would be the next to wield the gavel.

But for those outside Washington, the inevitability seemed tone-deaf and ultimately unrealistic. As it turns out, they were right.

The people’s voice was heard loud and clear by those members that would have had to cast a public vote in favor of McCarthy.

As the news broke this afternoon, Washington reporters rushed to produce the latest so-called hot take on why McCarthy dropped out and pondered if the “deeply divided” GOP could ever unite around a speaker.

Not surprisingly though, in a social media age, many of these explanations were shallow and lacking any appreciation of what has transpired over the past five years.

The reality is simple: In the aftermath of the 2011 showdown over the debt ceiling—the showdown that led to the spending caps that Boehner, et al. are now attempting to bust—the GOP began taking a passive posture toward President Obama and a dismissive disposition toward conservatives.

That dynamic within the House Republican Conference has been building over the past four years. It came close to boiling over in January, and finally became too much in September.

Of course, Americans outside of Washington played an undeniably important role in this process. The revival of the conservative grassroots empowered by access to information and a proliferation of technology created an atmosphere that forced Boehner to resign. And in a nod to political reality, McCarthy said “I don’t want to make voting for speaker a tough one…” Indeed it would have been, because as Boehner’s second in command, McCarthy would have been viewed in a similarly unfavorable light.

Rep. Peter King, a liberal Republican from New York, suggested America is now “A banana republic.” That is a petulant, childish reaction intended to dismiss the serious nature of the party’s internal divisions.

To be clear, the solution to overcoming that divide is not some moderate caretaker or an absurd coalition-style government with Nancy Pelosi.

Instead, House Republicans need to unite around a speaker who will pursue a positive conservative agenda that promotes opportunity for all and favoritism to none.

That means moving away from the U.S. Chamber of Commerce’s preferred agenda. It means embracing serious policy reforms and challenging the left on the merits of those policies. It means fighting Obama in a real, substantive manner.

Washington tends not to address policy challenges until there is some action-forcing event.

The Republican Party has fallen into the same trap—refusing to recognize or address its serious internal problems. This is an action-forcing event, and every single Republican needs to recognize it as such.