Deportation Numbers Have Dramatically Fallen. Is This Related to Obama’s Immigration Actions? 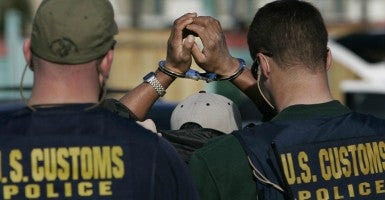 Deportations have fallen to the lowest point since 2006, according to unreleased government deportation data the Associated Press recently acquired. Furthermore, criminal immigrants being removed have also fallen to the lowest point of the Obama administration. These figures put two huge holes in the administration’s excuses for not enforcing immigration laws and could even be used as evidence against the administration in the legal battles over the president’s executive action.

However, removals are only one form of deportation. Returns, a less punitive form of deportation, fell to 178,000 in 2013, the lowest rate since 1967. When added together, there were fewer removals and returns in 2013 than in any other year since 1973. With these new AP numbers, we now know that the number is falling even farther.

Perhaps the most telling part of the AP story, however, is that the deportation of criminal aliens also fell from 2014 to 2015. As part of the administration’s executive actions on immigration, the Department of Homeland Security claims that it has limited resources and so it must use its prosecutorial discretion to focus on criminal illegal immigrants.

So why are removals of criminal immigrants also falling when DHS is supposedly focusing its time and resources on finding and deporting them?

“The decline suggests the administration was failing to find criminal immigrants in the U.S. interior, or that fewer immigrants living in the U.S. illegally had criminal records serious enough to justify deporting them.”

The AP has stumbled upon the crux of the issue. In other words, DHS is increasingly incompetent, or the more likely answer is that DHS has defined its removal priorities so narrowly that it is running out of priority individuals to remove.

This goes to the very heart of the Obama administration’s logic on immigration enforcement. The administration says that it has limited resources, and so it has to focus on the really bad guys. But deportation of criminal aliens is decreasing, not increasing, as DHS supposedly concentrates its resources on removing them.

In fact,Immigration and Customs Enforcement (ICE) agents are now sitting on their hands because, by order of DHS policy, they are not allowed to remove anyone else. Rather than stewarding limited resources, they are being wasted. Fewer people are being deported despite stable or increasing budgets for immigration agencies.

As the courts continue to consider Obama’s unilateral executive actions on immigration, prosecutorial discretion is a key part of the administration’s case.

Unfortunately for the administration, its case is crumbling right along with its deportation numbers.