To Defeat ISIS, We Need a Leader Who’s Not Obama 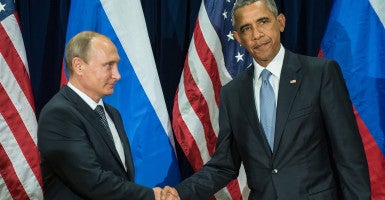 When President Obama said at the United Nations on Tuesday that “defeating ISIL requires—I believe—a new leader,” I thought for a brief moment I’d finally found something on which he and I could agree.

Then I realized he wasn’t talking about his own leadership.

The president was actually talking about the regime of Bashar Assad, the Syrian dictator Team Obama has been calling on for years to step down.

But you can understand why I thought the prez was reflecting on his own performance, considering the “death by a thousand cuts” approach that the White House’s policy on Syria, Iraq, and the Islamic State has taken recently.

For instance, this week the president was forced to meet one-on-one with Russian President Vladimir Putin, whom Obama had been shunning as often as possible, on the sidelines of the U.N. General Assembly gathering, to discuss Syria.

Obama met with Putin because he had to.

Russia had deployed an expeditionary force to Syria ostensibly to defeat the Islamic State, but in fact to prop up the Assad regime and to change the channel from Ukraine (see my Sept. 18 column in the Boston Herald, “Plotting Putin boosts Russian presence in Syria”).

Undeterred by his U.N. meeting with Obama, Putin sprang into action in Syria with air strikes midweek. Interestingly, the attacks were against not ISIS, but instead other anti-Assad groups, according to the Pentagon.

There are also new reports that the Russian military told the United States to get out of Syrian airspace. This may explain why Russia sent surface-to-air missiles to Syria, which NATO’s top commander, U.S. Gen. Philip Breedlove, revealed this week.

Those missiles aren’t needed for fighting ISIS (which has no aircraft), but instead could be aimed at the U.S.-led coalition’s air forces should they stray near, or interfere with, Russian interests.

That’s a situation just begging for a crisis.

If that isn’t bad enough, Iraq recently announced plans to share intelligence on the Islamic State (and who knows what else) with Iran, Syria, and—ta-da!—Russia, which may beef up its security presence in the country.

Considering the level of U.S. involvement in the region—with American boots on the ground in Iraq and the likely sharing of intelligence with Baghdad—it’s certainly possible that American secrets and interests could be compromised by these info “exchanges.”

And as the dismal U.S.-backed Syrian rebel program disappears into the dustbin of history, reports indicate that one rebel unit handed over some American equipment to al-Qaeda’s Nusra Front in exchange for “safe passage.”

But what’s even more infuriating is the White House response to that failed Syrian rebel program aimed at defeating ISIS. White House flack Josh Earnest basically told reporters that the president never liked the idea—and its failure proves he was right.

But OK, if Team Obama has so much insight into what works and what doesn’t work regarding Syria, Iraq, and the Islamic State—why has our policy been failing miserably so far?

What we do know—what the White House should, too—is that its expected review of U.S. strategy on these matters can’t come too soon.