The Consequences of Russia’s Bombing Campaign in Syria 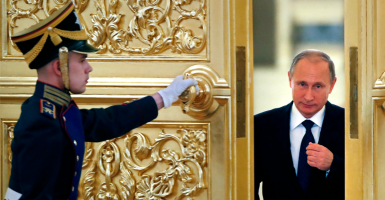 Russian President Vladimir Putin says he is targeting ISIS terrorists in Syria, but the Syrian opposition alleges that the raids have hit territory held by other rebel groups and killed civilians. (Photo: Yuri Kochetkov/Pool/EPA/Newscom)

Since the fall of the Soviet Union, the United States has worked to isolate Russia from the Middle East.

Now, in 2015 and five years into a devastating civil war in Syria, Russia has not only entered the most intractable situation in the Middle East, but also attacked the situation with indiscriminate authority.

Under the guise of fighting terrorism to protect itself and save the ruthless government of Bashar Assad, Russian warplanes on Thursday conducted a second day of air strikes in Syria, allegedly targeting not the Islamic State, but rival rebel groups.

By targeting rival insurgent groups to the Islamic State, the terrorist group also known as ISIS, foreign policy experts say Russia is complicating a Syrian conflict that has resulted in hundreds of thousands of deaths and a surge of refugees.

Experts who spoke with The Daily Signal say Russia’s emergence into the Syrian conflict, foreshadowed by its military buildup at an air base in Latakia, Syria, over the last three weeks, makes a diplomatic solution to the war more difficult and could result in accidents between American and Russian warplanes flying in the same area.

These experts say that by taking a hands-off approach to the Syrian conflict since day one, the Obama administration—seemingly blindsided by the Russian moves—has left itself with few options to deter the behavior, and now, to stop it.

“Four or five years ago, there would have been a lot more options than right now,” said David Schenker, the director of the Program on Arab Politics at the Washington Institute for Near East Policy.

“This is a problem that hasn’t aged well, and our options are narrow in the absence of U.S. leadership that has left a vacuum. Now, we have a de facto division of labor, where the U.S. attacks ISIS in the East and the Russians whack the remainder of the opposition—secular, liberal, and otherwise—and the ones most threatening to the Assad regime.”

In choosing to take out the rival rebel groups—including at least one U.S.-backed group trained by the Central Intelligence Agency—experts say the Russian campaign will do more harm than good, having little impact in defeating ISIS and propping up Assad, whose government forces had been suffering losses recently.

“[Russian President Vladimir] Putin is portraying this as joining the international fight against ISIS,” said Steve Bucci, a foreign and national security policy expert at The Heritage Foundation. “Don’t get me wrong; he doesn’t like ISIS. There is a counter-terrorism connection that is legit. But it is mostly a fig leaf. It’s probably fourth down on their list of reasons to do this.”

Bucci said the Russians are purposely targeting groups other than ISIS because these are the ones most successful in fighting Assad.

“If you eliminate all of the others, the choice is Assad or ISIS,” Bucci said. “So there are no other options, and that makes their argument to leave Assad in place more marketable to the rest of the world.”

‘Could Have Stopped’ It

On Wednesday, Defense Secretary Ash Carter and Secretary of State John Kerry criticized Russia for failing to communicate the details of their mission.

Putin and Obama met at the United Nations General Assembly earlier this week to talk about the fight against ISIS and the Syrian conflict.

“By supporting Assad and seemingly taking on everybody fighting Assad,” Carter said, Russia is “taking on the whole rest of the country that’s fighting Assad.”

“That’s why the Russian position is doomed to fail,” Carter added.

Kerry, meanwhile, said the U.S. would explore “options” to solve the conflict. President Obama has been reluctant to engage too deeply in the Syria conflict. (Kevin Lamarque/Reuters/Newscom)

Even so, some believe that the Obama administration could have done more to prevent the Russian advance in the first place.

“We could have stopped this deployment is Syria,” said Jorge Benitez, a senior fellow in the Brent Scowcroft Center on International Security at the Atlantic Council.

“We do have a partnership with the government of Iraq, whose airspace Russia used to move weapons and aircraft. We could have played a stronger negotiating role to try and prevent that, but so far this administration has not been successful in persuading Baghdad to stop it.”

In fact, this past weekend, Iraq joined Russia, Iran, and Syria in a new agreement to strengthen cooperation against ISIS, in another move orchestrated by Putin to rival the U.S. for influence in the region.

With Russia gaining influence in the region, experts say the Americans have limited choices to muzzle them.

For one, the Russians aren’t likely going anywhere.

“You can’t tell them not to do stuff,” Bucci said. “They are a sovereign nation. If they want to support someone who say they say is an ally, even though the rest of world is saying their ally is a rotten guy who needs to go, they have the power to do that.”

Experts say the U.S. should at least aim to forge an agreement with Russia to ensure that Russian planes are not conflicting with the international coalition’s mission, which the Americans lead.

A Syrian refugee gives thanks to God as he arrives in an overcrowded dinghy on the Greek island of Lesbos after crossing part of the Aegean Sea from Turkey. (Photo: Yannis Behrakis/Reuters/Newscom)

The U.S. can also choose to apply further sanctions on Russia, in addition to the ones already punishing the Kremlin for their intervention in Ukraine.

Benitez says the U.S. could blockade the Port of Tartus in Latakia, Russia’s only naval base in the region, to prevent the Kremlin from being able to ferry in equipment and weapons.

The Obama administration could even enhance its support for the moderate Syrian rebels, so they can make gains against the Assad regime—or do something even more drastic.

“Perhaps we could boost these rebels up to where they can inflict losses on the Russians,” Schenker said. “It’s not something any administration would do without credible escalation of things, but of course we have to remember Russia’s reportedly killing people the U.S. is supporting and training in Syria.”

If nothing changes, or if Russia escalates its behavior more, the consequences could be tragic.

Because most of the Syrians fleeing the country are escaping the bombs of the Assad regime, not ISIS, the refugee crisis that has paralyzed Europe figures to worsen.

“Russia’s actions won’t solve the problem, but exacerbate it,” Schenker said. “If you want to depopulate a country of Sunni Muslims, then what the Russians are doing is great,” he said sarcastically.

In addition, because the Russians don’t not have advanced weapons like the U.S. would use—“bombs that have almost no guidance,” Benitez says— it’s likely they could miss their intended target and harm civilians.

Despite the complexity of the Syrian problem, the experts say, some of the culpability will fall on the Americans.

“Frankly, the administration has not taken any action to demonstrate it wanted to play role in the Syria crisis since 2011,” Schenker said. “We have essentially been an observer. The U.S. has zero credibility on anything having to do with Syria, so I wouldn’t expect the Russians to anticipate the U.S. will change its policy of disengagement.”