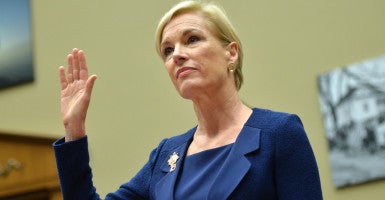 The Center for Medical Progress has responded to Cecile Richards’ testimony at a House Oversight Committee hearing on Tuesday.

Richards, the president of Planned Parenthood, was questioned by lawmakers for several hours over the use of taxpayer funding by her organization.

David Daleiden, the founder of the Center for Medical Progress and the project lead for its “Human Capital” series, said in a statement released Tuesday:

The Center for Medical Progress continues to cooperate with the now-five Congressional Committee investigations, subject to an unconstitutional prior-restraint TRO [temporary restraining order] from Planned Parenthood’s allies at the National Abortion Federation. If Planned Parenthood wants to see all of CMP’s footage released, as they claimed in the hearing today, then they should tell their cronies at the National Abortion Federation to back down from their unconstitutional suppression of First Amendment rights to free speech and citizen journalism.

Planned Parenthood faces allegations raised by the Center for Medical Progress’ undercover videos that it is trafficking aborted fetal body parts, which is a felony in the United States. Planned Parenthood spokespersons and Richards have denied illegal conduct.