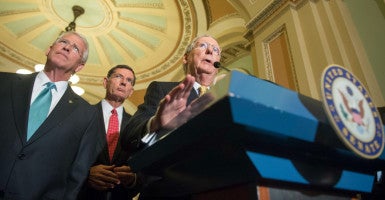 As you may have heard, bad things are happening on Capitol Hill.

Here’s the really bad news: it’s even worse than you probably think.

In addition to GOP leadership caving on issue after issue, they are also stripping other members of Congress, and therefore the American people, of their ability and rights to have their voices heard.

My colleague Rob Bluey wrote here about how GOP Senate leadership blocked Sen. Ted Cruz, R-Texas, from offering amendments this week to defund Planned Parenthood and stop the Iran nuclear deal. But this goes deeper than just a cheap shot against Cruz.

To understand what’s really going on, I spoke with Rachel Bovard, a veteran of the House and Senate, and now The Heritage Foundation’s director of policy promotion.

As you’ll learn from our Q&A, the season of trick or treat is alive and well in Washington.

Q: Exactly what happened with the Cruz amendments?

A: The Senate vote on Monday was a cloture vote to proceed to a “clean” continuing resolution—meaning it included taxpayer funds for Planned Parenthood. It passed 77-19. In the process of filing the bill, Sen. Mitch McConnell “filled the tree,” meaning he himself inserted various amendments to then block out all other senators from offering their own amendments.

By the way, this was the same tactic used habitually by his Democrat predecessor, Harry Reid, to stifle debate and block senators from offering amendments.

After the cloture motion passed, Cruz sought to use the tools of the Senate to remove the amendment tree to offer his own amendment. He was then denied a sufficient second, and thus denied an opportunity to offer his amendment. Sen. Mike Lee, R-Utah, was the only one who rose in support.

Q: OK, but what about those who say one senator, such as Cruz, shouldn’t be allowed to hold up the business of the Senate?

A: To understand the significance of what happened, you need to know a few rules about the Senate.

Second, a sufficient second is required for a member to offer a bill or amendment up for a vote. The most important thing to note here is that, out of respect for each member’s institutional rights, sufficient seconds are nearly always given as a matter of custom, regardless of whether individual senators agree. For example, consider that Cruz and Lee gave Sen. Mark Kirk, R-Ill., a sufficient second on his amendment to reauthorize the Export-Import bank, an amendment both of them oppose.

It’s simply what’s done out of senatorial courtesy and respect for the chamber.

Q: What does a “sufficient second” mean, and why couldn’t Cruz get one?

A: Technically, a sufficient second is one-fifth of the quorum, or 20 senators, if all members are present. The Senate generally operates in a “continuous quorum.” That is, for the purposes of doing business, they pretend that there is always a quorum present. That’s why members can go to the floor to conduct business, sometimes without any other members present. The Senate generally operates in a way where it is assumed that a quorum is present and members can have their sufficient second.

But in this case, McConnell decided that the way the Senate has historically operated no longer applies. As he did with Cruz this week, and as he did when Cruz and Lee tried to secure votes to repeal Obamacare and to defund Planned Parenthood on a transportation funding bill in July, he orchestrated other members not raising their hands and offering a second, and then required the chair to enforce the regular order (which, historically, is not enforced for this purpose).

So when Cruz wanted to offer his amendment, suddenly he had to have one-fifth of the members physically present and consenting to give him a sufficient second. Basically, McConnell is applying one set of rules to everyone else, and one set to Cruz and Lee, and in a completely arbitrary way in that he doesn’t tell anyone he’s suddenly going to enforce these rules.

Q: Clearly this was not helpful to getting an amendment introduced to defund Planned Parenthood, but you believe this has a much longer-term and poisonous effect on the Senate. How so?

A: I would classify it as an extraordinary centralization of power by the Senate majority leader, and an extremely heavy-handed and unprecedented move.

Again, unique to the Senate is the idea that each senator has the right to call up their bills and amendments to be deliberated in full on the floor. That is an institutional right of all senators, and a principle on which deliberation in the Senate has operated for hundreds of years.

To suddenly decree yourself the arbiter of what “deserves” a vote and what does not overturns years of precedent and sets a dangerous new standard for both the Senate and representative democracy.

Now one man, the majority leader, gets to decide what issue is worthy enough to get a vote, and who is worthy enough to offer it. Not only is McConnell diluting the historical right of each senator (regardless of party), but he is also silencing the people that those senators represent.