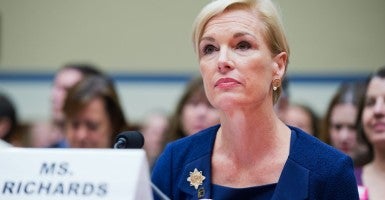 "We don’t get a big check': Cecile Richards, president of Planned Parenthood Federation of America, appears Tuesday at a House committee hearing on whether to defund the organization. (Photo: Tom Williams/CQ Roll Call/Newscom)

The fight over Planned Parenthood reached a boiling point Tuesday on Capitol Hill when Cecile Richards, president of the organization, testified before Congress about how the group uses taxpayer dollars.

Richards fiercely defended Planned Parenthood from allegations made by House Republicans, which she called “outrageous, “offensive,” and “categorically untrue.”

“The latest smear campaign is based on efforts by our opponents to entrap our doctors and clinicians into breaking the law—and once again our opponents failed,” Richards said in testimony before the House Oversight and Government Reform Committee.

The hearing was called by Chairman Jason Chaffetz in light of  what he called “disturbing” videos that emerged this summer detailing tissue procurement from aborted babies. Yet, during the hearing, committee members spent little time addressing the videos from the pro-life Center for Medical Progress.

Instead, Republican lawmakers focused their questioning on Planned Parenthood’s finances and how the organization spends its $528 million in annual taxpayer funding.

Democrats, on the other hand, defended the organization and called out Republicans for taking their fight against Planned Parenthood too far.

“You threatened to shut down the government, you ousted your speaker, and now you want to set off yet another select committee to investigate,” Rep. Elijah Cummings, D-Va., said. “Do you really want to do this? Do you really want to align yourself with radical extremists?”

But Republicans didn’t back down. They spent the next five hours peppering Richards with questions over the services Planned Parenthood provides,  travel and party expenses, employee salaries, and “commingling” of 501(c)(3) and 501(c)(4) funds.

Here is a summary of key points addressed in Tuesday’s hearing.

“Planned Parenthood is an organization with massive salaries,” Chaffetz said.

Committee members raised concern over reports that more than 40 of Planned Parenthood’s executives earned at least $200,000 in the years 2009 to 2013.

Democrats shot back, criticizing Republicans for “attacking a woman for making a good salary.”

Look at how you’ve been treated as a witness. Intimidation, talking over, interrupting, cutting off sentences, criticizing you because of your salary. How dare you? Who do you think you are? Making a professional salary as a head of a premier national organization, and daring to actually make decisions as the head of that organization? Lord almighty, what’s America coming to? The disrespect, the misogyny rampant here today tells us what’s really going on here.

Rep. John Duncan, R-Tenn., pushed back, telling Richards: “Surely you don’t expect us to go easy on you because you’re a woman.”

Republicans also took issue with the amount Planned Parenthood spends on travel, galas, and real estate. In a memorandum, Chaffetz said the organization spent more than $5 million on travel in 2013, some of which was spent on first-class or charter travel.

“For the record, I do not travel first class,” Richards said.

“The taxpayers are funding over 40 percent of Planned Parenthood—they just have a right to know how this money is being spent,” Rep. Cynthia Lummis, R-Wyo., told Richards. (Emphasis is The Daily Signal’s.)

“We don’t get a big check from the government,” she said, adding: “We, like other Medicaid providers, are reimbursed for services.”

In addition to Planned Parenthood Federation of America, which provides services to women through nearly 700 health clinics and affiliates, the organization has a lobbying arm called Planned Parenthood Action Fund, which advocates specific legislation and backs politicians who support those policies.

Republicans took issue with the structure of the two organizations, arguing that taxpayer dollars “subsidize” political affiliates that routinely back Democrat politicians.

“This is advocacy, lobbying, it’s get out the vote,” Chaffetz said. “It’s the commingling of funds that bothers us. That’s what we’re concerned about.”

Richards denied any wrongdoing but said part of her salary is derived from Planned Parenthood Action Fund. She said she would provide the committee with more information on the matter.

According to Chaffetz’s report, the organization sent more than $32.1 million outside the U.S. over the past five years. One of those locations was the Democratic Republic of Congo, which Chaffetz said could be a serious issue because the U.S. government has sanctions on that country.

Richards said she would follow up with more information, but that the organization is committed to investing in women’s health services in developing countries.

Republicans pressed Richards on some Planned Parenthood services, including reports that breast cancer screenings declined by nearly 50 percent from 2009 to 2013.

“How many of your affiliates have mammogram machines?” Rep. Mia Love, R-Utah, asked.

“We do not have mammogram machines at our health centers, and we’ve never stated that we did,” Richards replied.

Instead, Richards said, the organization provides manual breast cancer screenings and refers women who need a mammogram to other clinics.

She said Planned Parenthood performs about 300,000 abortions a year, and the procedures make up 3 percent of all health services at its clinics.

Republican lawmakers pressed Richards on these numbers, asking how the organization derived the statistics.

Lawmakers cited one affiliate that reported receiving $1.4 million from abortion services, or 28 percent of that affiliate’s entire revenue.

“If 2.7 million women are served, according to your testimony … and [Planned Parenthood] annually provided 327,000 abortions last year, according to your report…I do the math … that comes up to 12 percent. So how do you get 3 percent?” Rep. Mark Meadows, R-N.C., said.  (Emphasis is The Daily Signal’s.)

“Some people come to us more than once for different services,” Richards responded.

When asked whether stripping Planned Parenthood of taxpayer dollars would affect its abortion services, Richards said, “I can’t think of a specific impact.”

However, she said the proposal to defund the organization “would deny people on Medicaid the ability to go to a provider of their choice, and many of them do go to Planned Parenthood for a variety of different reasons.”