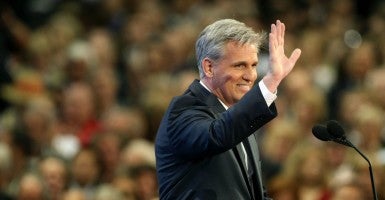 House Majority Leader Kevin McCarthy, who is running for speaker, vowed to "heal the divisions in our conference." (Photo: Newscom)

House Majority Leader Kevin McCarthy announced Monday that he will be running for House speaker.

If elected, McCarthy will replace Speaker John Boehner, who is set to resign at the end of October.

“We have made real progress towards shrinking an overgrown federal government and reforming our broken entitlement system,” McCarthy wrote in an email to his GOP colleagues. “But our work is far from done. We can’t ignore the differences that exist, but we can and must heal the divisions in our conference with work, time, and trust. That is why I have decided to run for Speaker of the House and graciously ask for your support.”

According to a report by CNN, McCarthy “is quietly locking down support to be the next House speaker [by] privately assuring Republicans he’ll take a tougher stand against the White House—and also the Senate GOP leadership.”

CNN added that he is “widely expected to win the job when leadership elections occur later this month, though he’ll have to work for it.”

Placing McCarthy in this prominent leadership position may be advantageous for GOP Congress members seeking to advance the conservative cause.

Tensions between the Senate and House have risen in the past few months centering on issues such as defunding Planned Parenthood and reviving the Export-Import Bank, resulting in a virtual standstill to make progress on either side.

Senate Majority Leader Mitch McConnell’s position and actions have raised controversy between conservatives. During the summer, the Kentucky Republican allowed for a vote on an amendment to the highway bill that included reauthorization of the Export-Import Bank.

McCarthy, along with many GOP lawmakers, disagreed with McConnell about the Ex-Im Bank revival issue. In a June interview with “Fox News Sunday,” McCarthy was asked whether he would support closing the Ex-Im Bank and responded, “Yes, because it’s something that the private sector can be able to do.”

On July 27, Sen. Ted Cruz, R-Texas, tweeted, “Rather than keeping his promise, the Majority Leader turned his back on the American people and allowed #ExIm to be reauthorized.”

Conservatives have consistently criticized the bank, associating it with crony capitalism, and have been confronted with opposition from Republican leaders.

Conservatives are anxious to see a speaker that will challenge Senate leadership and the White House agenda. Many are wondering if this could set the tone for McCarthy to take a tougher stance on conservative issues than Boehner did.

“The challenge for any lawmaker looking to move up the leadership ladder is to explain how he or she will operate differently from the Boehner team. Signing off on the continued funding of Planned Parenthood should raise questions as to whether the new leadership would be the same as the old leadership. Working with Democrats to fund the president’s priorities sends the wrong signal.”

If the torch is passed on to McCarthy, he will face challenges with lawmakers on both sides of the political spectrum. The Wall Street Journal said, that if elected, McCarthy “would inherit a series of messy legislative problems that could require him to risk alienating colleagues before he even acclimates to the new job.”

Mulvaney said McCarthy is a “ground-up” type of leader. But that “the important question is, will things change? Will they change for the better or will we simply replace Mr. Boehner with somebody else who will do the same thing.”