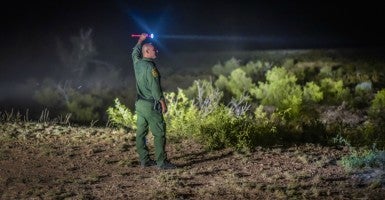 The amount of United States border patrol arrests soared in the month of August.

The Associated Press reported that almost 10,000 immigrant children and families were arrested at the Mexico border as they tried crossing illegally during the month of August.

Data released by the U.S. Border Patrol on Monday shows this is an increase of 52 percent from the amount of arrests made in August 2014.

White House press secretary Josh Earnest called the increase in border patrol arrests during August a “concern” for the administration.

In 2014, after a wave of Central American children and their mothers came across the border illegally, the Obama administration took measures to try house them until their asylum cases could be heard, spending hundreds of millions of dollars.

Detention centers were opened, as a deterrent to cross into the country illegally, for those waiting to have a deportation hearing.

“Take for example the recent judge’s ruling that children and their families can’t be held in detention centers,” says David Inserra, a homeland security policy analyst at The Heritage Foundation. “While this is a huge blow to the enforcement of the law, already most immigrants aren’t detained. Instead, they are allowed to enter the U.S. with instructions to report to a local [U.S. Immigration and Customs Enforcement] office or immigration court, which many do not do.”

A federal judge in California ruled in July that the U.S. Department of Justice’s system to detain illegal immigrants at unlicensed facilities is in violation of the law.

“They are holding children in unsafe facilities, it’s that simple,” an attorney in the case, Peter Schey, said in an email to The Associated Press. “It’s intolerable, it’s in humane, and it needs to end, and end sooner rather than later.”

A report by the Congressional Research Service shows that 62 percent of children did not show up for their cases before an immigration judge from July 2014-February 2015, reports The Washington Times.

“While the administration has taken steps to tell would be illegal immigrants that they will be returned to their home country, actions speak louder than words,” Inserra said. “It has become clear to those contemplating illegally entering the U.S. that once here, you are unlikely to be deported.”

Earlier this year it was reported that Mexico now deports more illegal immigrants from Central America than the United States does.