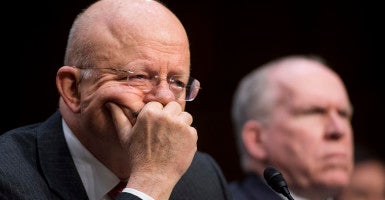 Intelligence analysts can make no more serious a charge than to claim that somebody altered their work and their assessments. It goes to the very core of their function: the integrity of their work as it reaches top-level customers. Those customers range from political leaders to generals, all the way to the commander in chief.

But that’s exactly what dozens of analysts at the Defense Intelligence Agency, or DIA, alleged when they formally complained that senior U.S. Central Command officers intentionally altered their analyses to inflate the assessment of Iraqi Security Forces’ capabilities and downplay the growing threats and capabilities of the Islamic State, the largest, most virulent Islamic terrorist group operating in the world today.

Intelligence analysts exist to provide unbiased, unvarnished assessments to decision-makers. Those assessments must be free to go wherever facts and reason dictate, even if it means going against the grain of a particular political narrative. Such independence is the currency of the analytical realm.

The issue of independence is so critical that it is essential that the analysts’ allegations of suppressed or altered intelligence assessments be investigated thoroughly and expeditiously. The Pentagon’s inspector general is on the case.

If the allegations are determined to be well-founded, it will mean that top brass at a combatant command violated the sacrosanct professional code of intelligence to provide objective analysis, free of political bias and personal agendas. The fact that as many as 50 analysts reportedly signed the complaint filed with the inspector general suggests that the problem is not a stand-alone case, but systemic. Signing onto a whistle-blowing complaint can easily be a career-ender. The analysts who made the very difficult decision to take this step must be commended for reporting their concerns about political influence corrupting their work.

This is an extremely high-stakes, high-profile case for the intelligence community. The nation’s analytic professionals are watching closely to see how it is handled. Punishing these analysts will effectively negate the inspector general’s process with regard to analytic objectivity.

To preserve intelligence as a profession, an analyst’s ability to “speak truth to power” must be protected at all costs. If analysts do not feel secure to provide objective analysis, especially if it does not support or even contradicts customers’ preferred policies, our nation will not be well-served. Many might be tempted—consciously or subconsciously—to alter their analyses to avoid friction with the end-users of intelligence. Any distortion in analysis has the potential to lead to flawed policy decisions and, in the long-term, to failed policies. On the other hand, decision-makers must be able to count on analysts to bring their unbiased best judgments forward to help inform difficult decisions.

Why protect intelligence the analysts’ ability to provide unvarnished assessments? Because even without external pressure, an analyst bears the burden to provide accurate information and evaluations on issues that are inherently ambiguous, complex, and sometimes “unknowable” to any level of fidelity. Even under ideal circumstances, analysts are challenged in assessing any given situation because:

Let’s be clear. No decision-maker is obligated to accept an analyst’s assessment. The customer can always acknowledge it and move on with his policies and strategies regardless. But alternative analysis should always be welcomed by customers—given the lessons learned from the intelligence failure concerning the nonexistence of weapons of mass destruction in Iraq in 2003—because it can help them build into their policies room to maneuver, in the event primary analysis turned out to be wrong.

”Devil’s advocate” reviews and red team exercises are other options to challenge the majority view on analysis. These analytic approaches take courage, but they can also reassure policy and military customers that alternative views have been considered. By challenging their own policy assumptions, alternative perspectives can be useful for those customers.

Only when analysts have a sense of security and no fear of manipulation—or worse, adverse action—will they fully express well-grounded hypotheses and analytic lines that deviate from established views and judgments. Without that assurance, they are seriously hampered in performing their professional duty: to obtain and report truth as they see it.

Originally published in Defense One.