The Constitution Doesn’t Mean Whatever Judges Think It Does 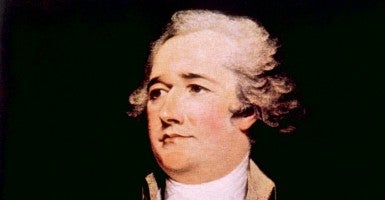 When we think of Alexander Hamilton, we think of him as a great promoter of the Constitution and as America’s financial founding father. He is most famous as the organizer and lead author of the Federalist, and then as the architect of the plan to pay America’s revolutionary war debt and of its first national bank.

Hamilton also, however, gave careful attention to the problems of foreign policy. As a high-ranking member of George Washington’s Administration, he was frequently called upon to advise the President on delicate matters of international politics. Hamilton served as Secretary of the Treasury while his great political rival, Thomas Jefferson, served as Secretary of State. Nevertheless, Washington relied at least as much on Hamilton’s thinking in navigating the great questions of war and peace that confronted the infant republic.

As I argue at greater length in a new First Principles essay for The Heritage Foundation, Hamilton’s foreign policy thinking is still relevant. The world has changed a great deal since the 1790s, but the aims of nations, and the principles they ought to observe in regulating their conduct toward foreign governments, have remained the same. In fact, Hamilton’s sure grasp of the practical and moral complexities of foreign policy makes his thinking fresher and more compelling than the one-sided approaches that have tended to dominate our foreign policy debates in recent years.

Much academic study of foreign policy takes place between the opposed poles of realism and idealism. In its extreme form, realism holds that nation-states act only to promote their own power and that no other consideration is necessary to understand international politics. On the other side, idealists contend that foreign policy should be guided at the deepest level not by considerations of power but by a desire to do right—for example, to promote human rights and a just international order.

Hamilton, in contrast, reminds us that each of these theories gets at only a part of the truth about foreign policy, and therefore that a truly realistic or accurate approach must incorporate elements of both. Hamilton, indeed, insisted that foreign policy is and should be guided primarily by attention to the nation’s interests. In his famous Pacificus essays, written in defense of Washington’s Neutrality Proclamation, Hamilton argued strenuously against those who held that gratitude to France should influence American policy. Gratitude, he contended, rarely has a place in foreign policy because nations rarely act from benevolent and disinterested motives.

This did not mean, however, that morality has no place in foreign policy. On the contrary, Hamilton held that nations are ordinarily obliged to observe justice and good faith. While nations acted mainly to advance their own interests, it was both right and prudent for them to observe some decent restraints on their conduct. This meant primarily keeping to their agreements and observing the long-established law of nations. Hamilton thus did not reject the role of morality in foreign policy. He rather rejected an unrealistically demanding morality, one that expected nations to do good for each other without thinking of their own well-being.

We might wonder whether such an approach can provide the moral content that modern Americans expect in their foreign policy. Americans, after all, are idealistic people who want their government’s policy to be not only limited by decent restraints but also animated by a high-minded benevolence. Hamilton’s thought, however, can do justice to these aspirations as well.

He did not so much reject benevolence in foreign policy as remind his fellow-countrymen that it had to be made compatible with the national interest. He thus admitted that a government might act on generous motives, so long as its policy did not sacrifice the national interest to such motives. Here, again, his thinking provides a path by which we can overcome one of the sterile dichotomies of contemporary foreign policy debate.

Our public conversation about foreign policy is often presented as a contest between interventionism and non-interventionism. The obvious problem with this debate is that we cannot make a principle of either intervention or non-intervention. Whether or not to intervene in another nation’s internal affairs is a question of prudence that depends on careful attention to the moral and practical circumstances of each case.

Hamilton understood this, and he reminded his fellow Americans of the kind of principles that should guide our thinking about this question. He observed that it can be not only permissible but even highly commendable for one nation to assist another’s struggle for liberty. A Hamiltonian foreign policy, then, would not simply look with indifference on the efforts of some foreign nations to throw off tyrannical rule.

At the same time, however, Hamilton also noted that a nation’s foreign policy must not seek gratuitously to stir up rebellion in countries that are quietly living under their own governments, however imperfect, and even unfree, those governments might be. Hamilton’s thinking on this question was informed by the principles of the Declaration of Independence. He observed that it belonged to each people to decide whether their condition was so intolerable that it justified the risks of an effort to overthrow the government. Accordingly, it was not the part of other nations to foment rebellion where it did not exist, although they could properly come to its aid where it did exist.

A Hamiltonian foreign policy, then, can do justice to both American principles and American interests. It can embrace both our aspiration to stand for universal standards of right and our need to safeguard our own well-being. It is therefore an approach to foreign policy that is as relevant today as it was in Hamilton’s time.

Carson Holloway is an associate professor of Political Science at the University of Nebraska at Omaha and the author of the forthcoming book, Hamilton versus Jefferson in the Washington Administration: Completing the Founding or Betraying the Founding.