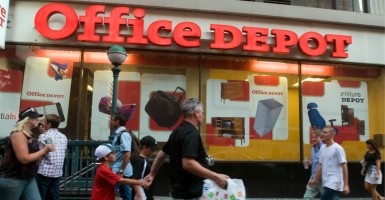 Office Depot's CEO apologized to Maria Goldstein after an Office Depot in Schaumburg, Illinois, refused to make copies of her pro-life flier. (Photo: Richard B. Levine/Newscome)

The CEO of Office Depot has apologized for a store’s refusal to print a pro-life flier.

The office supply store received complaints of religious discrimination from customers after its rejection of the flier.

Maria Goldstein, a Roman Catholic, ordered 500 copies of a pro-life flier to be handed out at her parish from an Office Depot in Schaumburg, Illinois.

The flier included statistics about Planned Parenthood’s services and taxpayer funding, and a prayer titled “Prayer for the Conversion of Planned Parenthood,” by Fr. Frank Pavone, the national director of Priests for Life and the author of “Abolishing Abortion.”

According to the Thomas More Society, an organization providing legal assistance to Goldstein, she was told by an Office Depot employee that the store was unable to print her order due to “corporate policy” and that her order would not be filled. The employee added that Goldstein could use the self-service copy machines in the store to print her flier.

Goldstein said that she felt Office Depot had discriminated against her based on her religious beliefs, and the Thomas More Society sent a letter to the company on her behalf.

On Friday, the CEO issued an apology to Goldstein.

“We sincerely apologize to Ms. Goldstein for her experience and our initial reaction was not at all related to her religious beliefs. We invite her to return to Office Depot if she still wishes to print the flier,” Roland Smith, chairman and chief executive of Office Depot, said in a statement.

In a statement, a spokesperson for the company said that “Office Depot has long maintained a policy of not allowing associates to print items that violate copyright laws, advocate persecution of any group or contain graphic material. Upon a more detailed review, we have determined that the content of Ms. Goldstein’s flyer is not a clear violation of the company’s policy.”

In a statement, Tom Olp, an attorney with the Thomas More Society, said:

We are grateful that Office Depot has apologized for discriminating against Maria Goldstein based on the content of her religious, pro-life flyers. This situation is a reminder that religious liberty is increasingly under attack today, but it is a fundamental American right that every one of us should value and defend.

Thanks to the help of the Thomas More Society, I was able to stand up for my rights as a Christian, and I hope other people are empowered to stand up for their religious freedom, as well. I am grateful that God has used this situation to unite countless people in prayer for the conversion of Planned Parenthood.

In a statement, Pavone said:

I was personally assured that Office Depot would be more than happy to fill orders to reprint my prayer, and I accepted both their apology and their reasonableness, and it is my hope that more people will in fact have that prayer copied at Office Depot.

Moreover, I ask that customers then bring those copies to their parish church, just as Maria Goldstein had set out to do, and I ask pastors to distribute them this coming Sunday, which is part of our national prayer campaign for the conversion of Planned Parenthood.

Prior to the CEO’s apology, Office Depot spokeswoman Karen Denning told the Chicago Tribune that the flier “contained material that advocates the persecution of people who support abortion rights.”

Denning did not immediately return The Daily Signal’s request for comment.