Why ‘Sagging Pants’ Should Not Be a Criminal Offense 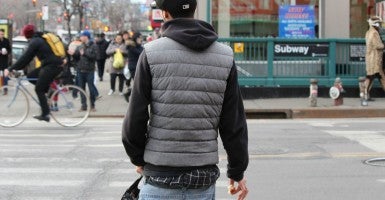 The war on bad fashion has a new battlefront: Dadeville, Ala.

Members of the Dadeville City Council are considering an ordinance to punish people wearing sagging pants or revealing miniskirts in public.

“I am ashamed to see all the sagging pants around here,” said Frank Goodman, the councilor who proposed the law. “We are going to see if we can do something about all the kids walking around with saggy pants.”

Goodman’s colleague, Councilwoman Stephanie Kelley, argued that men and women should be treated equally under this law. “My comment was if they are going to point at the guys, they should point at the girls too,” Kelley said. “When you got on short shorts or a short skirt, leaving nothing to the imagination … it’s like you’re advertising.”

If caught wearing clothes not deemed to comport with the Dadeville City Council’s sartorial preferences, you can expect to pay a fine between $25 and $100.

Laws like the one Dadeville is considering are nothing new:

Who knew that saggy pants and miniskirts were such a threat to public safety?

Law like Dadeville’s are the natural result of overcriminalization—the phenomenon where politicians misuse or abuse the criminal law, often by making ordinary behavior a criminal act.

It is where government bureaucrats criminalize setting up a hot dog stand, building a miniature bookshelf on your own property, or even feeding homeless people. It is where politicians are encouraged to pass laws without regard for the innocent people who become trapped by them.

Reasonable people can disagree about what activity constitutes the bounds of acceptable behavior, especially in cases of public display, but the first instinct should not be to pass yet another law.

The members of the Dadeville City Council should not treat every societal ill with criminal punishment as the only cure.