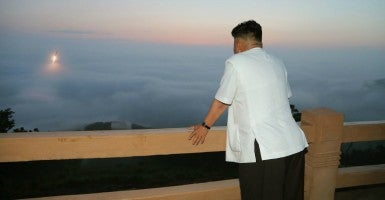 North Korean leader Kim Jong-un witnesses the launch of a ballistic missile. The North's official Korean Central News Agency reported on June 30, 2014, that Kim "guided a tactical rocket firing drill," adding that during the drill there was a precision-guided missiles launch and firing of shells. The report did not specify the details on the time and place of the launches, but the South Korean military said the North fired two short-range missiles into the East Sea earlier in the day. (Photo: Yonhap News/YNA/Newscom)

For the second day in a row, Pyongyang raised the ante on rhetoric suggesting it might conduct a prohibited nuclear or missile test in violation of numerous United Nations resolutions.

North Korea may conduct either test to celebrate the 70th anniversary of the founding of the Korea Workers Party on October 10. While satellite imagery previously showed preparatory work at both nuclear and missile test sites, there has been no observable activity indicative of an imminent test.

If the regime conducts either test, it will torpedo nascent efforts at inter-Korean reconciliation following a crisis last month triggered by North Korea’s planting of a land mine in South Korea, maiming two South Korean soldiers, and a subsequent exchange of artillery fire.

Seoul and Pyongyang reached an agreement to reduce tensions but a North Korean test would undermine the accord, trigger U.N. Security Council action, and escalate tensions on the Korean Peninsula.

Pyongyang stated on September 15 that it had restarted operations at its Yongbyon nuclear reactor. The head of the North Korean Atomic Energy Institute told North Korean media, “We have begun to run our nuclear facility, including an enrichment plant and five-megawatt reactors at Yongbyon after performing maintenance.”

The official claimed that North Korea is “improving the quantity and quality of nuclear weapons to an innovative level every day” and hinted at a fourth nuclear test by commenting, “We’re ready to cope with hostility with our nuclear weapons.” North Korea previously carried out nuclear tests in 2006, 2009, and 2013.

Recent commercial satellite imagery recently revealed new activity underway at the 5-megawatt reactor and the radio-chemical laboratory complex at the Yongbyon nuclear facility. Both areas are key to the production of plutonium for building nuclear weapons. In August, satellite imagery indicated that North Korea was expanding its capacity to mine and mill natural uranium, probably for expanding its nuclear weapons stockpile.

Monday, North Korean official media reported that the regime is “in the final stage” of developing a new observation satellite, and “the world will clearly see a series of satellites … soaring into the sky at the times and locations determined by the [ruling Workers Party] central committee.”

Although Pyongyang claims that its rocket launches are for civilian scientific purposes, United Nations resolutions unambiguously prohibit “any further launches that use ballistic missile technology, nuclear tests, or any other provocation.”

The United Nations directed Pyongyang to “abandon all nuclear weapons and existing nuclear programs,” elaborating that “all related activities (including uranium enrichment) are in violation of resolutions.”

What Does This Mean for the Korean Peninsula?

If North Korea conducts a nuclear or missile test, it will sabotage ongoing efforts to improve inter-Korean relations after last month’s crisis.

Both Koreas have agreed to another reunion of families separated since the Korean War as a preliminary step toward repairing relations, but South Korea remains resistant to removing sanctions or providing aid without significant steps by Pyongyang.

General Choi Yoon-hee, Chairman of the Joint Chiefs of Staff, vowed that South Korea would resume propaganda broadcasts along the DMZ if Pyongyang conducts either test. The broadcasts had triggered North Korea to fire artillery into South Korea in August.

The U.S. and its allies would respond to North Korean tests by returning to the United Nations for a new resolution and stiffer sanctions. Pyongyang has typically responded to such actions by declaring a state of war; threatening nuclear attacks on Washington, Seoul, and Tokyo; and occasionally moving military units closer to the DMZ.

Kim Jong-un’s motives are uncertain, but the statements are consistent with long-standing North Korean pledges to expand its nuclear arsenal quantitatively and qualitatively.

During his three years in power, Kim has repeatedly undercut tentative efforts at engagement by following with threats or provocative actions.