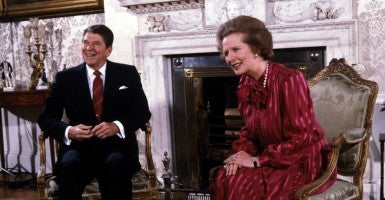 Dr. Eliza Filby is an academic, writer and businesswoman. She regularly appears in the media, as a historical commentator for BBC News, Sky News and Radio 4 and has written for the Daily Telegraph, The Spectator, Standpoint and The Tablet.

Few people are aware that former British Prime Minister Margaret Thatcher, one of the foremost politicians of the 20th century, was a lay Methodist preacher before she entered politics.

There has been very little examination into the role that her Christian faith played in her politics.

“Economics is the method; the object is to change the soul,” Thatcher once declared, revealing that the way she conceived her free-market ideology was as much about transforming values as about improving Britain’s ailing GDP.

More profoundly, there was a strong religious basis to Thatcher’s politics—one that stemmed from her strict Methodist upbringing and, more specifically, the chief influence in her life, her father, who was a greengrocer, councilor, and Wesleyan lay preacher.

In sourcing the origins of her free-market ideology, it is not in the pages of Frederick von Hayek’s “Road to Serfdom” or Milton Friedman’s monetarist theory where we find the answer, but in the sermon notes of her father, Alf Roberts.

Contained within his sermons, one finds the theological basis of what would later become the cornerstones of Thatcherism: an individualistic interpretation of the Bible, a nod to the spiritual dangers of avarice, praise of the Protestant work ethic, virtues of thrift and self-reliance, and finally, a divine justification for individual liberty and the free market.

>>> To Purchase God and Mrs. Thatcher: The Battle for Britain’s Soul.

In short, Thatcherism always owed more to Methodism than to Monetarism.

Thatcher herself was a preacher before she formally entered politics while a student at Oxford University. Even though she later transferred this missionary energy from the pulpit to the podium, her religious values remained an underlying core.

Indeed, on becoming leader of the Conservative Party in 1975, Thatcher (much like Ronald Reagan) saw it as her chief mission to completely undermine the moral credibility of socialism and communism and reconnect the broken link between Protestant and capitalist values in Britain.

Preaching from the pulpit on several occasions, Thatcher unashamedly asserted the Biblical case for the sovereignty of individual liberty and the “invisible hand.”

“Do not be tempted to identify virtue with collectivism,” she preached from the pulpit of St. Lawrence Jewry Church in London in 1978. “I wonder whether the State services would have done as much for the man who fell among the thieves as the Good Samaritan did for him.” According to Thatcher, “[i]t was to individuals that the Ten Commandments were addressed.” She continued, “We are called on to repent our own sins, not each others’.”

“What mattered,” in her words, “was Man’s relationship to God.”

Thatcher’s interpretation was that as Christianity was a call to men individually, so it should follow that political choices reside with the citizen rather than the state.

While such sentiments may have been standard and uncontroversial among Republican politicians in the U.S., in the more secular culture of British politics, Thatcher’s sermons incited moral outrage.

Many Christians, especially the established Church of England, would spend a large part of the 1980s repudiating the “Gospel of Thatcherism,” denigrating Thatcher’s policies as “unchristian,” and unmasking the social ramifications of her so-called values.

This would lead to a fractious conflict between Church and State that would irrevocably break the historic alliance between the Conservative Party and the Church of England, which had been in existence for over two centuries.

Unlike America, which has a secular state but a devout public, Britain has an established state Church but a largely agnostic public.

In the 1980s, while America saw the revival of a moral conservative movement, no such parallel development took place in Britain. In Parliament, legislation pertaining to personal morality such as abortion, homosexuality, and divorce were (and still are) deemed “conscience matters,” in which Members of Parliament were given a free vote and not subject to the party whip.

Thatcher may have been a Christian, but her faith was never moralistic. She certainly took an old-fashioned view toward sexual morality but ultimately saw such issues as a matter of personal conscience rather than subject to regulatory control.

One area where Thatcher’s faith did profoundly shape her outlook was in her approach to the great cause of the age: the Cold War.

Like Ronald Reagan and Pope John Paul II, Margaret Thatcher would play a crucial part in the propaganda offensive against the Eastern Bloc. “Men have forgotten God; that’s why this has all happened,” wrote Aleksandr Solzhenitsyn. It was a position with which Thatcher readily concurred.

More than any other British leader since Winston Churchill, Margaret Thatcher was willing to elevate the Cold War into one about ideas and values and to wage a crusade against atheistic communism—a position she demonstrated most openly in her unwavering support for Solidarity in Poland.

In 1983, Thatcher used the occasion of her acceptance speech for the Winston Churchill Foundation Award in Washington to assert the Cold War as one chiefly of ideas, not weapons:

‘You in the West,’ said an Hungarian poet, ‘have a special duty because you are free. That freedom is both a blessing and a burden. For it makes you spiritually responsible for the whole of humanity.’ He was right. For if we do not keep alive the flame of freedom that flame will go out, and every noble ideal will die with it. It is not by force of weapons but by force of ideas that we seek to spread liberty to the worlds oppressed.

For Thatcher, the fight against socialism at home and communism abroad was a fight for the sovereignty of liberty and individual free will.

This was an understanding that, from her earliest childhood, she had always understood as the central tenet of the Christian faith.

Dr. Eliza Filby will be speaking on Sept. 16 at the Heritage Foundation on her new book “God and Mrs. Thatcher: The Battle for Britain’s Soul” For more information on attending please click here.