The Double Standard on Smoking vs. Marijuana 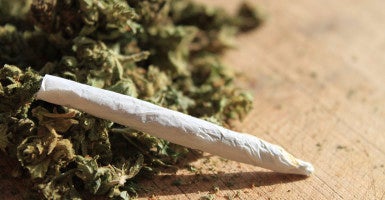 Marijuana use can harm someone, just like smoking can. (Photo: gvictoria/iStock)

A lot of things can date an old movie or TV show: clothes, furniture, cars. And another thing: cigarettes. They’re all over the place in many films, markers of an era when smoking was far more common.

It took a while—the surgeon general’s report came out five decades ago—but the percentage of smokers has declined, and rather drastically. Growing awareness of the health risks of tobacco helped bring a sharp drop in public acceptance.

So why are we witnessing the total opposite when it comes to marijuana?

At one time, marijuana was widely (and correctly) perceived as detrimental, and acceptance was low. Today, however, polls show that some 60 percent of Americans think it should be legalized. Four states (Colorado, Washington, Oregon, and Alaska) have done just that, legalizing it entirely, while 23 states and the District of Columbia approve it for medical use. Why this sea change?

It’s not because we’ve learned that the health risks were overstated. Advocates have insisted for decades that pot is no more harmful than tobacco and alcohol. Indeed, many go so far as to claim it’s safer. Unfortunately for them, the medical research does not back them up.

An article by the National Institute on Drug Abuse, published last year in the New England Journal of Medicine, documents many negative effects of marijuana use. And the research continues to pile up, showing how it can harm the developing teenage brain, increase the risk of heart attack, and diminish IQ.

“More than smoking tobacco and drinking alcohol, smoking marijuana can damage the heart, lungs and brain,” write William J. Bennett and Robert A. White in the new book “Going to Pot.” “Moreover, it immediately impairs cognitive abilities and motor coordination, interfering with the smoker’s judgment, driving skills, and other basic abilities.” It delivers more tar to the lungs than tobacco does, along with cancer-causing chemicals. Many long-term or heavy users develop symptoms of chronic bronchitis. In high doses, paranoia and psychosis result.

Many older adults who remember “smoking a little grass” back in school may scoff. Hey, they used it, and they’re just fine, right? What many of them don’t realize is that today’s marijuana is very different from the allegedly harmless joint passed around a party back in the ’70s or ’80s. Today’s pot is much more potent.

Years ago, the amount of tetrahydrocannabinol (THC, the stuff that gets you high) in marijuana was much lower—around 3 to 5 percent. But today’s “turbo pot” tends to be around 13 percent, and up to 20 or even 30 percent in some cases.

The main reason for the shift is the advent of “medical marijuana.” That put a halo of safety around the substance, making those who oppose it seem insensitive to the needs of people in chronic pain.

But, Bennett and White point out, it’s not as if doctors are prescribing it in places where it’s legal. In most places, a physician gives a patient who says he’s suffering “severe pain” a note that allows him (and the vast majority are, in fact, males under 35) to obtain a medical marijuana card. The pot he can then get is of unproven safety or purity—and much of it winds up in the hands of children and teenagers.

There’s another reason this shift occurred: Our nation’s leaders are no longer sounding the alarm on drugs as they once did. When hardly anyone hears a word about the many health problems associated with pot, and everything they do hear is about how medically beneficial it is, should we be surprised public opinion has changed so much?

Thanks to a long, sustained campaign, we successfully stigmatized tobacco use. The same can—and should—be done with marijuana.