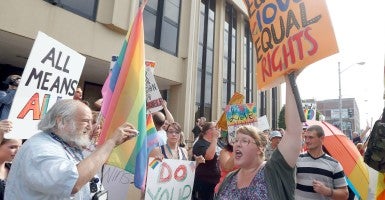 A judge has ordered that Rowan County Clerk Kim Davis be released from jail on the condition that she does not try to prevent her office from issuing marriage licenses to same-sex couples.

Five of the office’s six deputy clerks have testified that they will issue marriage licenses to same-sex couples.

The order also requires that Davis does not “interfere in any way, directly or indirectly, with the efforts of her deputy clerks to issue marriage licenses to all legally eligible couples.”

The Daily Signal previously reported that Davis became the center of a national controversy after she refused to issue same-sex marriage licenses following the Supreme Court’s ruling on Obergefell v. Hodges, which legalized same-sex marriage nationwide.

Davis has been in jail since Thursday, when she was held in contempt of court for defying Bunning’s order to issue marriage licenses to same-sex couples.

Davis testified that she believes in the biblical definition of marriage between one man and one woman and doesn’t want her name on same-sex marriage licenses.

Liberty Counsel, an organization that provides free legal assistance in religious liberty cases, is representing her in court.

In a statement, Mat Staver, founder and chairman of Liberty Counsel, said:

We are pleased that Kim Davis has been ordered released. She can never recover the past six days of her life spent in an isolated jail cell, where she was incarcerated like a common criminal because of her conscience and religious convictions. She is now free to return to her family, her coworkers and the office where she has faithfully served for the past 27 years. We will continue to assist Kim and pursue the multiple appeals she has filed.

The goal was to get Ms. Davis to issue licenses, and to stop imposing her religious beliefs on the citizens she was elected to serve. That goal has been achieved, for now. We are hopeful that Ms. Davis will comply with the Court’s orders and let her deputies continue to do their jobs.