Jobs Report Shows Some Growth, But There Are Warning Signs About Economy’s Future 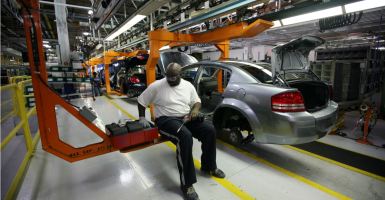 This was slightly below the 218,000 net jobs a month growth in the first seven months of the year. That difference is well within the survey’s margin of error.

Updates to the June and July estimates showed employers created 44,000 more jobs those months than previously reported. The payroll survey also showed an increase in average wages, which jumped 8 cents to $25.09 an hour.

The household survey reported the unemployment rate fell 0.2 percentage points to 5.1 percent – its lowest level since April of 2008.

That drop was driven – in almost equal measure – by unemployed workers finding jobs, and Americans leaving the labor force. As a result the labor force participation rate remained stuck at 62.6 percent – the lowest level since 1977.

This relative good news is tempered by the fact that almost all the aggregate drop in unemployment occurred among the short-term unemployed. The number of Americans unemployed for more than six months barely changed. The average duration of unemployment remains stuck at over six months (28 weeks).

Over the past two months wages have grown at a 3.4 percent annualized rate. However the Bureau of Labor and Statistics wage series is quite volatile.

The average over the past year is a more reliable measure of wage growth. Over the last 12 months average wages have grown 2.2 percent a year – about 2 percentage points above the PCE (personal consumption expenditures) inflation rate.

On the whole the jobs report shows continued steady growth, though some weakness remains in the labor market.

Nonetheless there are warning signs on the horizon.

The Chinese stock market recently dropped sharply, and the Chinese economy may well be entering a recession. If so, this would hurt the U.S. since China is a major American trading partner.

GDI is a more accurate measure of the health of the economy. When the government revises GDP figures as more data comes in, it tends to get revised towards the initial GDI estimates. The U.S. economy may be slowing down.

The labor market is a lagging indicator – unemployment typically does not increase until several months after an economic contraction begins.

The U.S. economy entered a recession in January 2008. Not until May of 2008 did the unemployment rate rise above 5 percent.

Today’s jobs report is cautiously positive, but Americans and policymakers should not feel overconfident about the economy’s health.