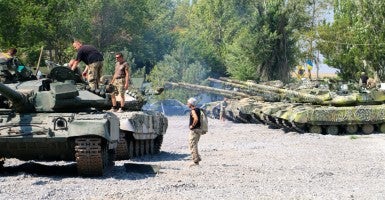 The Azov Battalion operates about a dozen T-64 tanks at its base in Urzuf, outside Mariupol. (Photo: Nolan Peterson/The Daily Signal)

URZUF, Ukraine—The vehicle yard at the Ukrainian National Guard Azov Battalion’s base here looks like the set of a Mad Max movie.

There is a semi-truck tractor covered in welded black armor parked next to a fleet of busses, minivans, pickup trucks and hatchback Volkswagens all painted in camouflage patterns—some sporting bullet holes. The up-armored semi-truck tractor was used when the Azov Battalion stormed Mariupol in June 2014 to take the city back from separatist control.

While Azov members or their supporters donated most of these civilian vehicles, the Ukrainian government has also supplied hand-me-downs from the Soviet era, including T-64 tanks and Soviet armored personnel carriers, called BTRs.

Azov’s T-64 tanks, armed with 125-mm guns, were mostly built in the 1980s and have upgraded armor and targeting and communications equipment. One tank has deep gouges in its armor from combined Russian-separatist machine gun fire. All of the armored vehicles are being repainted in Azov’s distinctive camouflage pattern (the soldiers call it “za za style”) and unit symbol.

The Ukrainian government supplied the armored vehicles as part of the Azov Battalion’s incorporation under the Ministry of the Interior as an official National Guard unit earlier this year. (The unit began as a civilian paramilitary group during the 2014 Maidan revolution.)

“In the first days, the separatists couldn’t even take apart a rifle,” said Azov’s 42-year-old deputy regiment commander at Urzuf who goes by the nom de guerre, Apis.

“Now they have tanks and artillery and anti-aircraft weapons,” he added. “And now we face Russian soldiers. We’ve had to become more professional to fight them.”

Azov’s base in Urzuf used to be the seaside villa of deposed Ukrainian President Viktor Yanukovych. There are about 400 soldiers based here for the defense of Mariupol—an industrial city of 500,000 about 40 kilometers (25 miles) to the northeast.

Yet, as the Ukraine war continues to escalate and as casualties mount, the Azov Battalion remains sidelined from the conflict, highlighting the uneasy relationship between the government in Kyiv and the many volunteer units on which it leaned heavily in the early days of the war.

“We’re not satisfied to be off the front line,” said Vyniy, the commander of Azov’s public affairs unit.

In August the Ukrainian government pulled all volunteer battalions, including Azov, off the front lines around Mariupol, replacing them with regular military units. The move, according to Kyiv, was a routine rotation of troops that reflected the increased combat readiness of the country’s regular military.

“The task of the Ukrainian armed forces is to deter aggression of the enemy,” Ukrainian General Staff Press Secretary Vladyslav Selezniov said Aug. 11, according to Ukrainska Pravda, a Ukrainian news site.

“The National Guard and the Ministry of Interior have their own tasks, which they perform on the second and third lines of defense,” Selezniov added, according to the report. “At the moment, the Ukrainian armed forces are located along the entire line of defense.” Three Ukrainian Marine battalions and one artillery division were sent to Mariupol to bolster the city’s defenses as the volunteer units were withdrawn. Ukrainian Marines replaced the volunteer battalions in Shyrokyne. During the transition, Azov troops said they only had two hours to vacate their positions in Shyrokyne, which included a network of trenches from which they had been fighting for more than six months.

“There was no handover at all,” Vyniy said.

Volunteer units like the Azov Battalion played a key role in spring and summer 2014 when the advance of combined Russian-separatist forces put Ukraine’s regular army on the defensive. And as the war has dragged on, the volunteer units have developed into some of Ukraine’s most battle-hardened and well-trained fighting forces.

Along with government forces, the Azov Battalion successfully fought in June 2014 to take Mariupol back from separatist control. Since then, Azov soldiers have fought in near daily battles on the city’s outskirts, repelling combined Russian-separatist attacks, including a tank battle in September 2014, and have endured a grinding, static trench and urban warfare battle for control of Shyrokyne.

Apis said officials in Kyiv claimed the recent withdrawal from Shyrokyne was due to high casualty rates among volunteer units. “They told us we had too many casualties,” Apis said. “But our casualties have been lower than the regular army’s.” About 400 soldiers are based in Urzuf. (Photo: Nolan Peterson/The Daily Signal)

Fighting has escalated along the front lines near Mariupol in the past several weeks, including an artillery attack on Aug. 26, which killed seven Ukrainian soldiers.

On Aug. 16, when combined Russian-separatist forces shelled the village of Sartana on Mariupol’s periphery with 152-mm artillery, killing three civilians, Azov soldiers went on alert and waited for orders to join the fight.

“We wanted to go to Sartana, but we had no orders,” Vyniy said.

On Aug. 17, the Ukrainian news site UNIAN reported that the Donbas Battalion— another volunteer unit, which had been pulled out of Shyrokyne like the Azov Battalion—had been redeployed near the line of contact outside Mariupol. Yet, despite the recent escalation, the 400 Azov soldiers remain at garrison in Urzuf.

There is speculation in Ukrainian media reports and on social media that the decision to pull the volunteer units back from the front lines around Mariupol was politically motivated and part of a larger move to neutralize the various volunteer units.

In an April 2015 report for the Swedish Defense Research Agency, Margarete Klein wrote:

“Volunteer battalions represent both an opportunity and a potential risk for Ukraine’s fragile statehood and democratization prospects. Particularly during the first months of ATO (Anti-Terrorist Operation), the volunteer organizations with their high fighting spirit contributed significantly to containing the separatists.”

“However,” Klein added, “there is still a real risk of volunteer formations becoming politicized or turning into private armies.”

There is a growing sense of national frustration with the government in Kyiv due to its prosecution of the war in the Donbas, the country’s flailing economy and the slow pace of pro-democracy and anti-corruption reforms.

“In addition to dissatisfaction with economic conditions, Ukrainians express little faith in some of their country’s major institutions,” the Pew report said. The Kyiv International Institute of Sociology conducted a poll in December 2014, which found that volunteer battalions were the second most trusted institution in Ukraine—only behind NGOs—ranking ahead of the president, prime minister, regular military, media, parliament and even the church.

“In the beginning everyone hated Azov because Russian media said we were killers, rapists and fascists,” Apis said. “But now people in Mariupol support us, they ask for our help more than the police.”

“Everybody in Azov now considers Mariupol their native city,” Vyniy said. “It’s hard to just sit here and do nothing while it’s being attacked.”

Southwest of Mariupol, the grass- and sunflower-covered Ukrainian steppe, open and rolling like a blanket being shook in the wind, meets the Azov Sea. There are a series of small resort towns along the coast, nestled within sandy coves or along rocky points. The beaches are wide and the sand is a tan color. Out in the distance, the horizon is freckled with the silhouettes of freighters, many of which call to port at Mariupol, transporting steel from the city’s factories or picking up grain brought by train from the country’s interior.

A fence cuts across the main beach in Mariupol, adjacent to the port. On one side are sunbathers. On the other side are mines and anti-personnel obstacles and barbed wire to defend against an amphibious invasion. It reminds one of images of Normandy in World War II.

In seaside towns like Melekyne, Yalta and Urzuf, it is harder to sense the war. Driving along the coastline one occasionally passes a concealed tank, a machine gun nest, or a minefield denoted with a skull and crossbones warning sign. But at the beaches, there are few reminders of the endless trench warfare an hour’s drive to the east.

The setting of Azov’s Urzuf base is tranquil. Brick walkways lined with Italian Cypress trees meander along a bluff overlooking the Sea of Azov. Below the base is a public beach where sunbathers are sprawled on the tan sand. There is a steady sea breeze, which kicks up small breakers just big enough to boogie board on. With the public beach in the background, Azov soldiers relax at their base in Urzuf. (Photo: Nolan Peterson/The Daily Signal)

Within the Azov compound, groups of soldiers linger inside wooden gazebos that line the bluff overlooking the sea. Many soldiers are tan and fit—the result of garrison life at a place with a beach and a Crossfit gym.

For the Azov soldiers in Urzuf, the idyllic, seaside resort feeling of Urzuf is a contradiction that leaves many feeling restless. Like many combat soldiers, they enjoy time off from the front to rest and recuperate, but they also know the war is not over and don’t like being benched from the fight.

“The mood is not very good,” said Valya, a 19-year-old from Urzuf who volunteered with Azov to be a combat medic.

“The men are waiting to fight,” she added.

“There are no words,” one Azov Battalion soldier responded when asked about unit morale. He sat on a bench in the shade, cradling his Kalashnikov, passing time chatting with three other soldiers.

“But our role is very simple; we don’t question orders,” he added. “We are only soldiers.”

An abandoned kindergarten adjacent to Yanukovych’s former villa serves as the unit’s dormitory. Male soldiers live six to a room and female soldiers (combat medics and support staff) mostly live two to a room. Outside the dorms, laundry and combat boots are drying in the sun.

Most soldiers carry weapons. A few walk quickly through the compound with a notepad in hand. There will be a training exercise late in the evening in the unit’s urban warfare simulation course. But they wait until the evening when it’s cooler. Afternoons, therefore, are slow-paced.

“Here we are a family,” Apis said. “People understand what is at stake.”

“It’s time to protect our country,” said Anton, a 29-year-old Azov Battalion soldier who spent six months fighting in Shyrokyne. “It’s not a civil war. There is the army of another country here.”

“It’s no problem to start World War III,” he added. “The problem is to stop it—to prevent a nuclear war.”