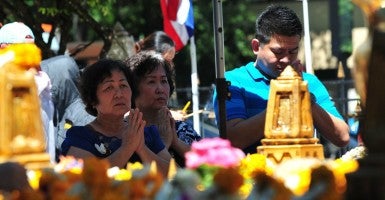 Thailand’s long-running political turmoil, and its consequent feud with Washington over its return to democracy, was interrupted on August 17.

At least 20 people are confirmed dead and more than 140 have been wounded in Thailand’s deadliest bombing in recent years.

The bombing took place during rush hour at Erawan shrine—a historical Hindu shrine in the heart of Bangkok’s shopping district.

While the Thai government has identified a potential suspect through video footage from the scene, the suspect is not in custody, and his motivations for plotting the attack remain unknown. Thai authorities believe that the suspect is a foreigner and that he had accomplices.

Just hours after the initial bombing, a second bomb went off at Sathorn bridge.

While it is unclear whether the two bombings were linked, the Thai government is investigating the incidents as if they were coordinated.

The Thai government is currently undertaking an investigation to determine the cause of the attack and has offered a 1-million-baht (about $28,000) reward for anyone with information about the bombing.

The scale, timing, and complexity of the Erawan shrine attack suggest that the Bangkok bombing was premeditated and intentionally sought to accrue mass casualties.

Some have speculated that the attack was politically motivated—carried out by persons opposed to the current military government and/or its effort to pass a new constitution.

Others have suggested that Muslim separatists from southern Thailand are most likely responsible for the attack.

Some surmise that it was a lone-wolf attack, or inspired by ISIS sympathizers. Even Hezbollah is a possibility, given recent history.

Regardless of the motivations for the attack, this is a good time to set aside our current preoccupation with Thailand—its 2014 coup and foot-dragging on a return to democracy—to remind ourselves what a valued friend and ally Thailand is.

Some commentators have suggested that the Bangkok bombings are the equivalent of the 9/11 attacks to Thailand.

This being the case, what Thailand needs from the U.S. right now is our unqualified support and sympathy and assistance in getting to the bottom of the attacks.