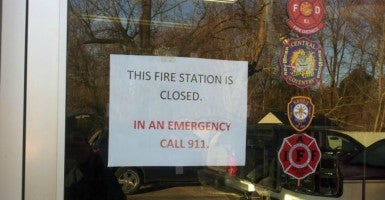 A battle to control costs in an 8-year-old fire district in Rhode Island pits voters against union leaders as a state-appointed receiver tries to pull the operation from bankruptcy. (Photos: Central Coventry Fire District Facebook)

PROVIDENCE, R.I.—In a battle of political wills in Rhode Island, local voters so far have held their ground against efforts by union leaders and state officials to make them pay more for fire and rescue services.

State lawmakers and local activists who side with the voters, however, see the situation as an ongoing threat to self-government.

“The people have rejected higher taxes over and over again because they want a new way of doing business,” state Rep. Patricia Morgan, R-West Warwick, says.

It started in 2006, when Central Coventry Fire District formed after four of the Rhode Island town’s seven smaller fire divisions voted to merge. Those four operations already had problems, and the new fire district’s finances were not in good order. They continued to spiral out of control as the district spent more than it was taking in.

Instead of curtailing expenses, the Central Coventry Fire District’s board of directors hired more firefighters and leased a new ladder truck.

The Coventry board also embraced a new collective bargaining agreement with the International Association of Firefighters Local 3372 that increased firefighters’ pay and benefits. Career firefighters represented by Local 3372 say they deserve a bigger cut of taxes for risking their lives.

The situation had reached crisis proportions by October 2011. Losses amounted to $637,000, according to the board’s income statement. Within two weeks, voters rejected the board’s budget.

‘Interference with the Democratic Process’

A year later, with losses nearing $1 million, a Superior Court judge pulled the plug on spending and appointed a bankruptcy lawyer to help reorganize the fire district’s finances.

Voters turned down that proposal in October 2012.

Next, Land set up a special election in February 2013 and asked the public to approve a slightly lower tax rate of  $2.99. Voters also rejected it.

A judge, noting that only a few hundred voters went to the polls, ordered another election the following month. This time, more than 1,800 voters showed up and again defeated the proposal for a $2.99 rate.

“It’s hard to get people to turn out for special elections,” Morgan says. “But we worked hard to spread the word, and once they understood how important this was, they began to turn out in droves.”

What officials of the firefighters union wanted, though, was approval of the higher tax rate. And “unfortunately,” Morgan says, “we began to see an unprecedented level of interference with the democratic process.”

Once it became clear to union leaders that voters would continue to reject their preferred salary and benefit package, they turned to allies in state government. In 2013, leaders of the firefighters union hit hard at state lawmakers who opposed their budget plan.

Reps. Scott Guthrie, D-Coventry, a retired firefighter, and Lisa Tomasso, D-Coventry, wife of a local police officer, spearheaded the Rhode Island General Assembly’s passage of a bill that in effect would subvert local elections and the authority of elected officials.

Passed at the end of the 2013 legislative session, the Guthrie bill (H6101) says that if the residents of a fire district vote down proposed spending, they must continue to pay the tax rate set by the previously approved budget.

Cost-Controllers Take Over Fire Board

Morgan says she was outraged.

“Whatever happened to government of the people, by the people and for the people?” the Republican lawmaker says, adding:

When did it become OK in these United States to say the people do not have a right to determine what is best for them? But that is exactly what the Guthrie bill does, and it is offensive to the whole idea of self-government.

In October 2013, voters threw out pro-union members of the Coventry fire district’s seven-member board. They installed a slate aligned with the Coventry Citizens Task Force, which had promised to control costs.

The results prompted the court to liquidate the Coventry fire district because the lower rate could not produce enough revenue to cover loan payments and the union contract.

Before the liquidation could take effect, the General Assembly intervened again.

The newly elected House speaker, Rep. Nicholas Mattiello, D-Cranston, made rectifying the financial crisis  his top priority. Morgan and other detractors accused the speaker of a conflict of interest because he leased office space to the firefighters union in Cranston. ‘The town of Coventry only gets about 12 fires a year,’ state Rep. Patricia Morgan says.

As his first piece of legislation as speaker, Mattiello sponsored an extension of the state’s Fiscal Stability Act. The measure, originally passed to address the bankruptcy of the town of Central Falls, was made to apply to fire districts as well.

The change meant the state Department of Revenue could take control and, in the view of opponents, attempt to reorganize the Coventry fire district’s finances to suit union interests.

Despite this new tool, Gov. Lincoln Chafee, who won office as an independent, was not able to reach agreement with union leaders to restructure the contract and operations to salvage the fire district in its current form.

Gov. Gina Raimondo, a Democrat who assumed office in January, now presides over the effort.

The revenue department designated a financial receiver to come up with a way to save the district. The receiver, however,  made little progress over eight months of negotiations with the union.

The latest state-appointed receiver, Mark A. Pfeiffer,  presented a five-year plan to save the fire district. Pfeiffer is a retired Superior Court judge.

Morgan submitted an alternative five-year plan on behalf of the fire district board and the Coventry Citizens Task Force. Her proposal includes use of private ambulance services to reduce costs.

“This makes sense,” Morgan says. “The entire town of Coventry only gets about 12 fires a year.” She adds:

Over 80 percent of the calls are emergency calls for ambulance services, not for fires. We are not breaking new ground with this very reasonable proposal, since private ambulance services are used all over Massachusetts and Connecticut and in 11 communities here in Rhode Island. The future of fire and rescue services for Coventry residents may grow from two competing plans.

‘Concerned About Where All This Will End’

Will the Morgan plan prevail? More importantly, what does all this say about the power of local government in Rhode Island?

“This change to the Fiscal Stability Act was obviously aimed at the Central Coventry Fire District,” says Marie Baker, a task force member who was elected to the fire board and serves as vice chairman. Baker adds:

The politicians in the state government have no regard for the taxpayers and the local business owners. If we lose out on self-government at the local level, we need to be concerned about where this will all end.

Morgan cites encouraging signs that voters are attuned to what she sees as the General Assembly’s efforts to undermine the policy preferences of residents at the behest of lawmakers’ union benefactors.

Guthrie and Tomasso, the lawmakers who had pushed the union-backed bill, both were voted out of office last year.

“We have started revolutions before in Rhode Island,” Morgan says. “Maybe we can do it again.”