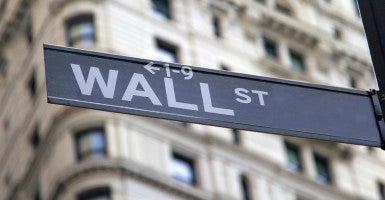 It's just not true that financial markets have been affected by fewer regulations. (Photo: art2002 / iStock)

Why do I write so much about the myth that financial market deregulation caused the financial crisis? Because that false narrative has spread so far and wide. Even some folks who are otherwise friendly to free markets have bought into it.

So here’s one more shot: financial markets were not deregulated in any meaningful way during the last 100 years.

It is true that federal regulators changed many rules and regulations over the century, but the notion that the new rules amounted to a lack of rules is dead wrong. Federal regulators have increasingly told banks and non-bank financial firms what they can do and how they can do it.

Last week, when discussing this topic, my friend Mark Calabria mentioned some evidence I had missed: Todd Conover’s congressional testimony in the 1980s.

Conover was the head of the Office of the Comptroller of the Currency (OCC) from 1981 to 1985, and his 1984 testimony (all 655 pages) is available on the St. Louis Federal Reserve Bank’s website. The testimony is yet another piece of evidence that banks were not deregulated.

But it also serves as evidence that Dodd-Frank and the new Basel III capital rules’ emphasis on so-called macro-prudential regulation is not as new as regulators would like us to believe.

As they tell the story, the new regulations will make markets safer because now, finally, regulators will focus on system-wide safety (a macro-view) as opposed to focusing only on the safety of individual banks.

Apparently, the word new also has a different meaning in Washington, because Conover’s testimony makes it clear that this macro-prudential focus is not new in the traditional sense of the word.

(It’s also worth pointing out that Conover was labeled a chief deregulator in the 1980s, particularly for his role in allowing banks to skirt the Glass-Steagall restrictions.)

The first important highlight is the subheading on page 209 of Mr. Conover’s written testimony: The Supervisor’s Role is to Maintain Systemic Soundness.

Our supervision of banks of all sizes has been enhanced by the establishment of an Industry Review Program. This program includes a computerized information system to collect data on industry concentrations in individual bank portfolios and the banking system as a whole.

In addition to the more frequent examinations we have undertaken, the examiners will also monitor trends and developments in the banks between examinations. This new approach results in near-constant supervision of each of our large banks.

We are now better able to identify and devote attention to items of supervisory concern in individual large banks and significant practices emerging in the large bank population as a whole.

Well, maybe the OCC was the only regulator focused on systemic risk?

In 1996, the Fed accounted for system-wide risk in its new rating system for financial institutions known as the CAMELS rating. (Prior to the change, the Fed used a CAMEL rating; the 1996 change merely added the “S,” which stood for sensitivity to market risk.)

These two facts alone make it pretty hard to argue that federal regulators were not focusing on system-wide risk prior to the 2008 crisis.

The testimony contains many other interesting tidbits that sound hauntingly familiar in the post-2008 era. For instance, what about the idea that regulators needed more information from other regulators?

So I would say, first of all, that we have the tools to get the information that we need. Do we need any new enforcement powers or tools of that nature? I honestly don’t think so…but we have cease and desist powers, civil money penalty powers, authority to remove officers.

At best, Conover was mistaken. But his statement indicates that regulators have always had the ability to access any information they thought they needed. (Starting around page 223, Conover also mentions working with the SEC on enforcement actions, even against top-level bank holding companies.)

Regardless of the extent of regulatory failure, the truth is U.S. banks haven’t been able to operate without regulators’ consent for a very long time.

The problem with our financial system has never been deregulation. The problem has been over-regulation and the socialization of risk, both of which are manifested in an incredible level of government micro-management.

Regulators literally try to structure markets in a particular way, sometimes with the help of industry—an added reason to get rid of the system we have. And while the regulators micro-manage, government provides a financial safety net to the firms and their creditors.

But regulators don’t know any more about the “right” way to set up an industry than anyone else. They have no special knowledge of, for example, which assets are too risky and which are safe.

The failed Basel rules are the perfect example of this folly. But no matter how badly the rules work, federal regulators keep implementing new versions and engaging in the fantasy that they can design a safe financial system.

The level of micromanaging long ago reached absurd levels, and Conover’s testimony gives a glimpse into what kind of environment banks have operated under for decades. Here are just a few quotes, starting on page 218:

The list goes on. Anyone who thinks that we have—or have had—a free-market oriented banking system should at least browse the testimony.

And anyone who thinks we’re safer now because of the new Basel rules and their higher levels of capital and liquidity should take a really close look at what Conover said in 1984. Particularly what he says on page 219:

Under regulations proposed by the OCC and the FDIC, all banks, regardless of size, would be required to maintain a minimum ratio of primary capital to total assets of 5.5 percent. The implementation of this regulation will require over 200 national banks to raise a total of over $5 billion in new capital. The Federal Reserve has proposed similar guidelines on capital.

Stricter regulatory capital requirements will strengthen the trend towards stronger capitalization of the nation’s largest banks. For example, in the first quarter of 1984 the average ratio of primary capital to total assets stood at 5.67 percent for the holding companies of the 11 multinational banks supervised by the OCC. This is almost 16 percent higher than the average level at those banks two years ago.

Policymakers need to reconsider the way we treat banks and other financial companies.

It’s time to face up to the fact that treating them as something special, relative to other types of businesses, hasn’t helped strengthen markets; it’s made them weaker. We shouldn’t expect different results this time.