John Kasich: The US Should Be Providing Aid to Ukraine 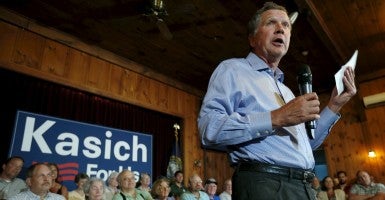 At a campaign stop in New Hampshire on Wednesday, Gov. John Kasich said the U.S. should provide aid to Ukraine and "let them fight for themselves." (Photo: Brian Snyder/Reuters/Newscom)

DERRY, N.H.— During a campaign stop at a town hall in New Hampshire today, Ohio Gov. John Kasich said the United States should be aiding Ukraine against Russian aggression.

“For the life of me, I cannot understand why we are not giving the Ukrainians [the ability] to defend themselves against Putin and the Russians,” Kasich said.

He explained that the Ukrainians should get the help they deserve.

“They’ve been through hell over the course of their existence, and we’ve got to let them fight for themselves.”

Kasich, a Republican running for president, called for a balanced federal budget, strengthening the military, reducing taxes and “fiscal sanity.”

He also called for the end of “sanctuary cities” for immigrants in the country illegally, but said “folks” who are already in the country and are “law-abiding” should be able to pay a fine and stay.

Kasich said we should “wipe out ISIS once and for all.”

He believes foreign aid, applied correctly, “can help us win the battle of ideas,” and preserve America’s leadership role in the world.

.@JohnKasich says the U.S. should be aiding Ukraine. #FITN pic.twitter.com/71s8ISDDip