Should You Be Able to Shoot Down a Drone Spying on Your Backyard? One Dad Was Arrested. 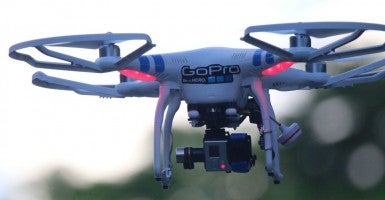 Lawmakers are responding to controversies involving drones in neighborhoods, where increasing use (even for pizza delivery) is raising national debates over rights to privacy, property, and self-defense.

One operator flew his drone dangerously close to a passenger plane on its final approach to a Dallas airport.

Another stopped fire-fighting helicopters from extinguishing wildfires. One even dropped 65.4 grams of marijuana, 6.6 grams of heroin, and 144.5 grams of tobacco into a crowded prison yard.

And in a “drunken misadventure,” a National Geospatial Intelligence Agency employee crashed a drone onto the White House lawn. The Secret Service could have destroyed that drone.

But if your neighbor’s drone comes onto your lawn, and if it is equipped with a camera or some unwelcome item, can you shoot it down without being arrested?

A teenage girl was sunbathing in her backyard in Hillview, Ky. when she saw a drone equipped with a camera hovering overhead, something which she, quite reasonably, found creepy. She alerted her father, who recalls:

The father defends his decision:

For defending against the unknown, he was arrested and charged with felony wanton endangerment and criminal mischief.

And he’s not alone.

A New Jersey resident who shot down a neighbor’s drone was arrested and charged with possession of a weapon for an unlawful purpose and criminal mischief.

After a Californian shot down a neighbor’s drone thinking “it was a CIA surveillance device,” the drone’s owner won a suit in a small claims court that found the man “acted unreasonably … regardless of whether it was over his property or not.”

The drone owner’s attorney stated that “you’re only privileged to use reasonable force in defense of property. Shooting a shotgun at this thing that isn’t threatening your property isn’t reasonable.”

The problem, however, is that unlike pedestrian trespass, your options for removing drones from your property are limited.

More troubling is this: how do you know when a drone is truly threatening?

As Michael Froomkin, a professor at the University of Miami School of Law, writes, neither the law nor technology has developed far enough to clarify what constitutes a threat and what measure of self-help is appropriate.

As long as homeowners justifiably believe that a drone entering their property conveys a threat, and act reasonably, they should be permitted to defend against it.

“Reasonableness” is an ad hoc determination.

For example, what if a drone carrying a harmless bubble-blowing machine entered your yard, but that machine looked like a weapon? Calling the police is the best response, but how long should someone have to wait to verify a threat before destroying it?

Ryan Calo, a professor at the University of Washington School of Law, writes, “[T]he lack of a coherent mental model of privacy harm helps account for the lag between the advancement of technology and privacy law.” But not so in criminal law, where tough-on-crime-mania routinely drives quick application of broadly phrased statutes to new contexts.

This leaves the Kentuckian father believing that “our rights are being trampled daily. Not on a local level only—but on a state and federal level. We need to have some laws in place to handle these things.”

These laws will take many forms as drone technology develops and drones become more common. For example, many states already fine or imprison individuals “for filming or audio recording at a farm without the owner’s consent.”

Ultimately, the Federal Aviation Administration has responsibility “for all civil airspace, including that above cities and towns,” and “is working to ensure the safe integration of unmanned aircraft.”

In Washington, Sen. Dianne Feinstein, D-Calif., spoke about drones, urging “regulation of size and type for private use,” “certification,” and “specific regulation on the kinds of uses it can be put to.”

But the 2012 FAA Modernization and Reform Act already restricts private drone use to hobby or recreational purposes within the operator’s visual line of sight.

Clearly, the sky will fill with regulations before it fills with drones. In the meantime, these laws should not overcriminalize the issue by treating those who engage in reasonable self-defense on their own property as criminals.