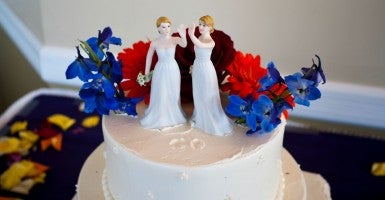 Figures of two women are seen on top of a wedding cake at a gay marriage in New York. (Photo: RICHARD B. LEVINE/Newscom)

A recently released poll shows significant public support for the protection of religious liberty—especially when special rights based on sexual orientation are being advanced at its expense.

The results reveal hope for the classical liberal vision of America: they indicate that most Americans still appear to want maximum freedom and individual rights protection.

According to Caddell Associates, which conducted the poll, “[t]here is an overwhelming sense on the part of American voters that they want to find common ground in order to protect both the expression of religious freedom and the rights of gays and lesbians.”

Those that were polled overwhelmingly made clear that they believed that religious individuals’ rights must be protected.

While poll respondents broadly supported protecting the rights of all, “when asked which was more important, by a four to one ratio, voters said protecting religious liberty (31 percent) over protecting gay and lesbian rights (8 percent).”

Notably, over half of the respondents (53 percent) said both were important. At the same time, there appears to be a desire to avoid an “all out cultural war between these competing interests,” the pollsters reported.

As the Washington Examiner notes, the poll shows that “Americans reacting to the Supreme Court’s approval of same sex marriage desire a truce between religious freedom and gay rights.”

However, “if pushed,” they “overwhelmingly side with protecting the liberty of their faith by a margin of 4 to 1.” It is heartening that still so many would recognize the core importance of that inherent human right that is our first freedom: the freedom of religion.

>>> To Read More On This, Download the ebook version of “Truth Overruled: The Future of Marriage and Religious Freedom” today!

Support for religious freedom jumps even higher in the context of wedding vendors.

Eighty-three percent said “yes” when asked whether a Christian wedding photographer with “deeply held religious beliefs opposing same sex marriage” as “the right to say no” to a same-sex couple asking him or her to photograph their wedding.

Amazingly, even “80 percent of Agnostic/Atheists said the photographer had the right to say no.”

There is hope for “live and let live” after all.

According to Caddell, “[m]ore than two-thirds (68 percent) disagreed” when asked if “the federal and state government should be able to require by law a private citizen to provide a service or their property for an event that is contrary to their religious beliefs.”

On this point, “[o]nly 18 percent agreed,” and “51 percent strongly disagreed.” And when asked if the government should be determining “legitimate religious beliefs,” a mere “11 percent agreed and a massive 79 percent disagreed.”

“[E]ven two-thirds of those on the ‘left’ of the segmentation disagreed.” These are significant numbers for those who still believe that a pluralistic vision for America is possible.

The polling also found that a majority believe “that the military has no right to regulate the religious actions of military chaplains.”

As the pollsters note, “no one wants a religious war over this issue.”

However, it is clear that a broad swath of Americans are demanding that religious individuals’ rights be protected as we move ahead in a world of legalized same-sex marriage.

Based on this poll, legislators should be encouraged to move forward with bills like the First Amendment Defense Act, which ensures that Americans can live in peace, side by side with those holding different views on marriage.