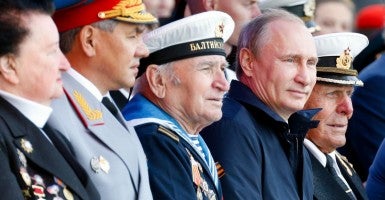 Ian Button is currently a member of the Young Leaders Program at The Heritage Foundation.

While presiding over “Navy Day” in Baltiysk, Russia, he formally approved changes to Russia’s naval doctrine.

Located in the strategically important Baltic exclave of Kaliningrad, the installation overlooks Poland to the southwest and Lithuania to the northeast, both NATO members.

Citing NATO’s “inadmissible” eastward enlargement, the new doctrine announced the bolstering of Russian naval assets in the Arctic and Atlantic.

Rogozin added that Russian “attention towards the Atlantic is justified by the expansion of NATO in the East.”

“By focusing on the Atlantic,” writes Matthew Bodner of the Moscow Times, “the amended doctrine asserts the Russian navy’s role as a countering force to what military planners in Moscow see as an encroaching NATO military alliance on Russian borders and interests.”

According to retired Russian Navy Commander Maxim Shepovalenko, this update signals “a long-term standoff with the U.S. and its NATO and major non-NATO allies.”

Shepovalenko then goes on to describe the strategy as “assertive in the West and in the North, and cooperative in the East and the South.”

According to analysis from BBC, “[t]he new doctrine calls for close co-operation with China in the Pacific region and India in the Indian Ocean.” Meanwhile, the Kremlin would pursue plans to guarantee unfettered access to the Atlantic, with or without NATO cooperation.

Russia also seeks to ensure safe passage in the opening lanes of the Northern Sea Route with its robust fleet of ice-breaking vessels. Strategists “see the Arctic as a key access point for Russia’s northern fleet to enter the Atlantic unimpeded by NATO.”

This comes at a time when Russian military spending has seen dramatic increases. As of 2013, its military budget had “more than doubled over the last decade.”

While some doubt Moscow’s ability to sustain such robust defense outlays, one thing remains certain: Russia is repositioning its naval assets with NATO in mind.

If Washington is to secure U.S. national interests in the Atlantic and Arctic Oceans, it will need to take more seriously its investments in Coast Guard and Navy capabilities.

Chief of Naval Operations Admiral Jonathan Greenert has identified “critical shortfalls in everything from ship deployments to munitions to the resiliency of sailors.”

While Secretary of the Navy Ray Mabus plans to expand the warship count “to more than 300 ships before the end of the decade,” U.S. maritime capabilities remain hampered by the ongoing effects of sequestration: “Today, at 284 warships, the United States Navy’s fleet is the smallest since World War I.”

Yet America’s maritime security shortfalls extend beyond its Navy.

As a result, “[w]e are conducting 21st century operations from veritable museums.” Constrained by sequestration, “the U.S. Coast Guard has one of the oldest fleets afloat, and at times struggles to live up to its long-held motto, Semper Paratus.”

While Russia prioritizes its naval forces in regions important to U.S. interests, America’s Navy and Coast Guard cannot fall behind.